“It makes for a goofy watch even if it’s not a memorable film.”

Aussie filmmaker Craig Gillespie (“I, Tonya”/”Fright Night”), in a sicko origin story, has a ball depicting in live-action the story of the notorious dog-napping female villain, with a penchant for puppy fur, the legendary fashionable Estella (Emma Stone), later known as Cruella de Vil. The LBGTQ-friendly tale recounts the early days of the screen’s notorious Cruella de Vil, a character from Disney’s 1961 animated classic “101 Dalmatians.” It plays out as an outrageous mod film, set in London’s punk rock days in the 1970s. The assertive character film is about an awful character who faced tragedy and doesn’t deserve our sympathy. It’s a terribly flawed film but is infectious, gritty and entertaining.


It’s written with a bite by Dana Fox and Tony McNamais and is adapted to the screen from Dodie Smith’s novel One Hundred and One Dalmatians.

Marked at birth with a unique coif of black and white hair, split down the middle, Estella’s raised by her maid single mom, Catherine (Emily Beecham). When attending school she’s a terror, as her weird looks and irritable nature provoke the other students. Expelled from school, the beset mom attributes her bad nature to her dark side and an alter ego she calls Cruella.

Estella’s caring mom, seeking help,  pays a secret visit to the famous and rich but cruel London fashion designer, the Baroness (Emma Thompson), at her secluded seaside manor at Hellman Hall. The visit ends with Estella witnessing her mom’s death, thereby leaving her penniless and orphaned in London at 12. At 16, she sleeps on the fountain of Regents Park and meets two other homeless children who teach her the art of thievery. She partners with her new best friends and over the years Horace (Paul Walter Hauser) and Jasper (Joel Fry) bring her along on their petty crimes and she becomes a grifter.

Ten years pass, and we roll into the 1970s mod London scene, Estella now played by Emma Stone is employed by the ritzy department store, Liberty of London, doing janitorial work and creating chaos there. One day there’s a mishap with a mannequin and a chance encounter with the imperious Baroness goes well for her.

It results in the Baroness hiring Estella as a designer. The damaged–goods Estella never forgives society for her poor mom’s untimely death and dedicates herself to getting even some day with her uncaring narcissist boss, an owner of three large dalmatians.

After a rock star commissions Estella to do a signature piece for him, she finds success in the world and you would think she might settle down and relent in her need for revenge. But after befriending tabloid journalist Anita Darling (Kirby Howell-Baptiste), Cruella finds accomplices to carry out her plans, such as —the androgynous boutique owner designer Artie (Joel McCrea), her devoted sycophant, and her boss’s long-time valet (Mark Strong).

Estella  will over time embrace being the crone Cruella, stating proudly: “I was born brilliant, born bad, and a little bit mad.”

Filmed with great visuals by DP Nicolas Karakatsanis, and loaded with fine CGIs (a mix of real dogs with digital ones), plus exquisite sets and costumes, the film has a devilish sparkle it embraces.

It makes for a goofy watch even if it’s not a memorable film. 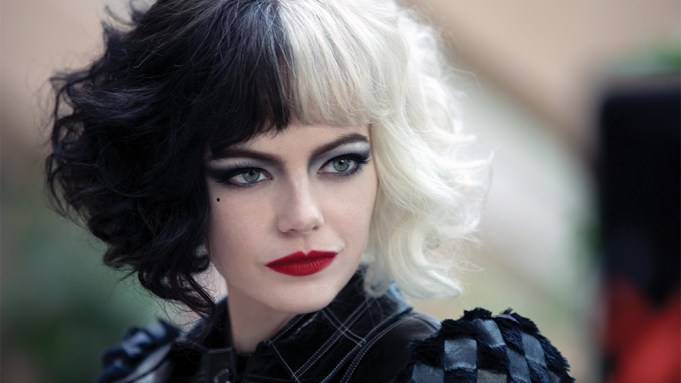 ANCHORMAN: THE LEGEND OF RON BURGUNDY

HEAD AGAINST THE WALL