“Casts a dark shadow over the American Dream.”

King Vidor (“Hallelujah!”/”Stella Dallas”/”Duel in the Sun”) directs this bleak but masterful silent drama about a regular guy’s realistic struggles through life as a white-collar worker. It starts with his birth on the Fourth of July, 1900 (America’s 124th birthday), whereas his dad proclaims big things from him. The arty film casts a dark shadow over the American Dream and how delusional it can be, and in its simple way it’s a deeply affecting tale that’s more credible than most films, including modern ones, that try to cover the same territory. There are just no false moves, the location shots of the enormous skyscrapers are eye-catching (filmed in the style of German Expressionism) and the acting is superb. This is a moving film that gets to you and stays with you for a long time after seeing it, as the realistic characters are sympathetic and the story has a ring of truth that can’t be denied.

John Sims (James Murray, novice actor, he got his big break but after the film’s success became a drunk and died eight years later falling off a pier) at the age of 21 treks to NYC and expects to make his way to the top of the crowd. We next see him working as an office clerk by his desk, one that’s identical with all the others in the big room. After work his coworker Bert (Bert Roach) fixes him up with a blind date, Mary (Eleanor Boardman, wife of King Vidor), and the cocky young man proposes to her on the subway ride home after spending a giddy evening at Coney Island with Bert and Jane (Estelle Clark). John and Mary honeymoon at Niagara Falls and afterwards he settles into his humble but boring job, has a loving marriage, raises a boy and a younger girl, and settles for this satisfying happy domestic scene while still believing destiny favors him even if he’s still a lowly clerk. John is elated when he wins $500 in a slogan contest, but soon tragedy hits as he witnesses his lovely young daughter run over in the street by a truck, in front of his tenement building, and when she dies he goes to pieces. Unable to concentrate on work, he quits when his boss doesn’t accept his work and he goes into a tantrum. Now unable to find work, he becomes depressed and contemplates suicide. His wife is about to go back with her brothers to her mother’s house, but John gets a job as a street clown who juggles balls and wears a sandwich-board sign on the streets of the city to advertise: “I AM ALWAYS HAPPY BECAUSE I EAT AT SCHNIEDER’S GRILL – 52 E. 14th St.” The family reunites, as Mary can’t leave him, and goes to the theater where they laugh their heads off at the silly vaudeville acts. The last shot is of the camera panning the laughing theater crowd and, like the first shot in the office, he’s still one of the faceless people in the crowd, but this time he seems to take comfort that he fits in anonymously to the surrounding masses. 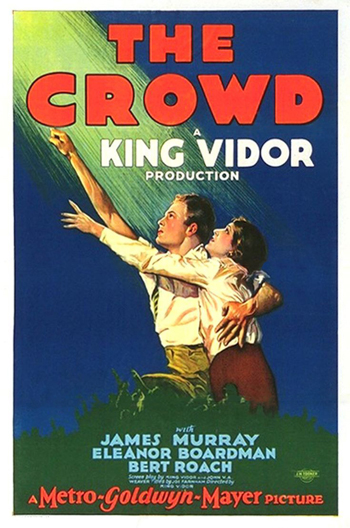