CRIMINAL, THE (aka The Concrete Jungle)

“Losey does an excellent job in depicting the brutality of both prison life and the British underworld.”

American expatriate Joseph Losey (“The Servant“/”The Go-Between“) directed this intense British underworld crime story about a career criminal and his downfall. It was tightly scripted by Jimmy Sangster and Alun Owen. The Criminal plays as a tough prison pic, one that is more gritty than the usual British crime caper. It was originally advertised as “The Toughest Film Ever Made in Britain!” I saw it on its new release on DVD, and was impressed with the quality of its b/w photography and with the way its grainy colors magnified the grim prison setting. It hits the spot immediately as Cleo Laine sings over the opening credits a prison ballad entitled “Thieving Boy.” But what elevates the film beyond its well-executed but familiar criminal double-cross tale, are all the fine performances from the superb cast. Stanley Baker as a crime big shot named Johnny Bannion sparkles as the loner, hard-boiled con with a penchant for violence and self-destruction. His greed for money and penchant for revenge blinds him. While Sam Wanamaker, who like Joseph Losey fled to England as a result of the Hollywood blacklist, excels as his nemesis in the crime organization. Patrick Magee as the sadistic prison guard, gives a striking performance as a demented servant of the public.

When Johnny Bannion is sprung early from prison for good behavior, he already has in mind to heist a racetrack. One of his cell mates gave him the inside scoop on how to do it for a share in the take. Outside the prison waiting for Johnny on his release is crime boss Mike Carter (Sam Wanamaker), who will be the money man for the heist.

The heist goes off without a hitch. Johnny stashes the £ 40,000 haul in a country field and uses some of the robbery loot to buy a diamond for his new girlfriend Suzanne (Margit Saad). This gets Johnny’s ex-girlfriend Maggie (Jill Bennett) jealous and she tips the cops off that he’s flashing money around. Johnny gets arrested when the money he used in the jewelry store is traced to the stolen racetrack money, and he’s back in prison serving a 15-year sentence.

Johnny’s now pressured by the police to return the money, while his accomplice Carter also wants the money and will not wait for Johnny to get released from prison. Unbeknownst to Johnny, Carter made a secret deal with prison kingpin Frank Saffron (Grégoire Aslan) to split the take. Johnny gets sucked into asking Saffron for help and agrees to give him the full £ 40,000 if he can use his contacts to get him out. The urgency for Johnny, is that Carter snatched his girlfriend and is threatening her life unless he gets the money. Saffron arranges for a prison riot and the nasty screw, Barrows (Magee), gets taken as a hostage by some prisoners, but Johnny is tricked into opening the door to allow the police in to stop the riot and rescue Barrows. As a reward he’s being transferred to an easier prison for his own safety, but on the transfer one of Saffron’s outside men helps him escape. Without thinking, Johnny heads straight for Carter’s hideout and falls into a trap. He’s thereby hunted down by Carter’s gang in the country field where he stashed the stolen loot and is killed before he can tell where it is located.

Stanley Baker’s character is seemingly always trapped behind prison bars, even when he’s free. In prison he’s caught in Magee’s power scheme to play one prisoner against another. On the outside, he can’t be a team player with crime kingpin Wanamaker and antagonizes him to such a degree that when he stumbles Baker’s not given another chance to recover. Losey does an excellent job in depicting the brutality of both prison life and the British underworld. 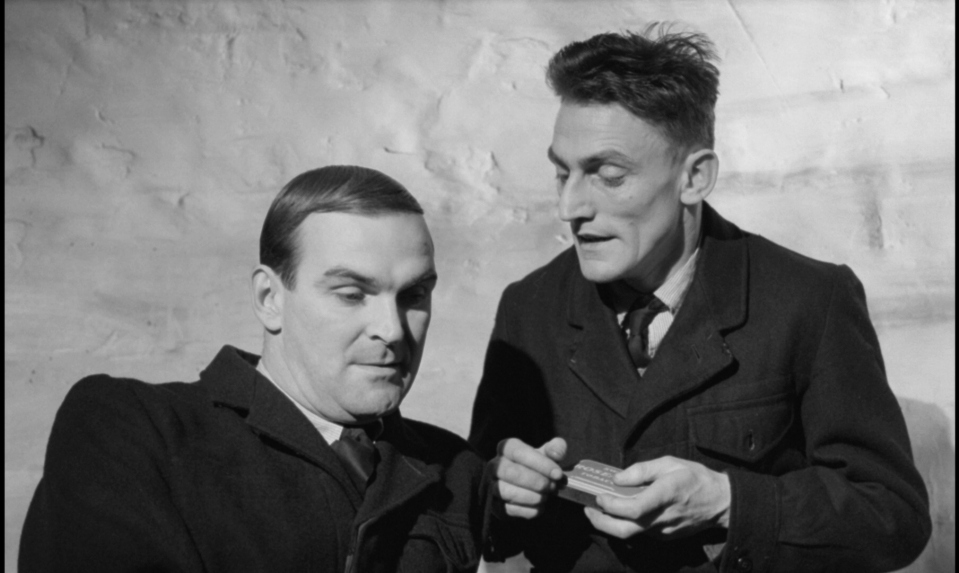