My favorite Charlie Chan which features Sidney Toler, who makes his first appearance following the death of the previous Charlie Chan, Warner Oland, in a series he will appear eleven times in. The studio heads of 20th Century Fox were most pleased with the appealing Toler, as the film proved to be a box-office success. Sen Yung also makes his debut as Jimmy Chan, number two son, and becomes the comic foil for the episode.

The film emphasized the goofiness of the characters more than paying attention to the detective story, but the warm feeling of the story was very satisfying. It is set in Honolulu and opens with the large Charlie Chan family noisily eating their meal; the only one of the 13 children missing, is his daughter. Soon his son-in-law arrives to tell the family that his wife is in the hospital and about to deliver their child. They all rush off to the hospital except for number five son, Willie (Layne), who stays behind for any phone messages. Inspector Rawlins calls and tells him to have his pop report to a freighter, where a man has been murdered. When Jimmy returns, the two decide to not tell pop and to solve the case on their own. Jimmy wants to show pop how capable he is and therefore get pop to finance his own private detective agency.

On the freighter Jimmy is mistaken for Charlie Chan, and begins the investigation. Captain Johnson (Barrat) seems to be anxious to get it solved quickly because he has a time schedule to meet and is afraid of losing money on his cargo. The dead man is unidentified but it is known that he was carrying a suitcase with $300,000 and was to meet Judy Hayes (Brooks), a secretary for a Shanghai bank, and hand her over the money to be deposited in her bank. Since the money is still there Judy locks it in her cabin, but it’s soon missing. When Jimmy investigates the largely foreign crew, they are about to throw him overboard but pop arrives and takes over the investigation.

The suspects are the six passengers and the two ship officers, Captain Johnson and his first mate Randolph (King). There’s the eccentric psychology doctor, Cardigan (Zucco), who pretends he’s deaf and is conducting experiments on criminal behavior by keeping their dead brains in a jar of alcohol. Mrs. Wayne (Dodd) is a mystery passenger, as she’s obviously wealthy yet she won’t state why she’s slumming on a freighter. Hogan (Collins) is a childish 37-year-old animal trainer traveling with a menagerie of animals, one of which is a lion he doesn’t keep caged and walks on a leash. Finally there’s Detective Arnold (Lane) and his prisoner McCoy (Lawrence), whom he is taking to be imprisoned in San Francisco. But we soon learn he’s a phony detective.

The case gets more complicated with another murder, and as new details about all the suspects arise. Charlie comes through by setting a trap for the killer, as he keeps all the suspects together in a cabin. The film successfully combines the zany comic antics with an exciting detective yarn, though purists of this series might not be that appreciative of all the comedy antics. 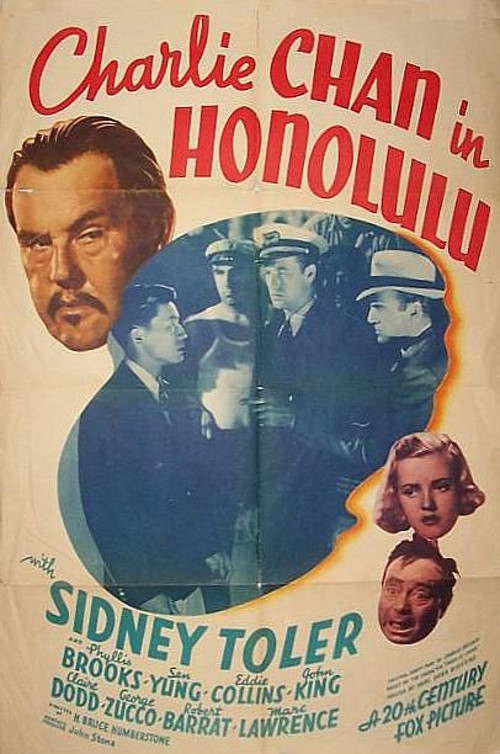