“This terrific lengthy three-hour documentary is the 40th by the acclaimed 85-year-old documentarian Frederick Wiseman.”

This terrific lengthy three-hour documentary is the 40th by the acclaimed 85-year-old documentarian Frederick Wiseman(“At Berkeley”/”National Gallery“/”Crazy Horse”). It follows in his usual signature style, with the always curious filmmaker unobtrusive as a fly-on-the-wall. There are no voiceovers, interviews or inter-titles. The film covers the economically, racially and ethically diverse NYC neighborhood of Jackson Heights, in the borough of Queens. The multi-ethnic neighborhood advertises itself as probably the most diverse in the world. The concerns of the filmmaker is seeing for himself how the melting pot of democracy is getting along and how it conducts itself as a community. He learns things are fine but the neighnorhood is being threatened with extinction by gentrification.

For Wiseman, it’s important for us to hear the views on the street by the locals, the voices heard from advocacy groups and from those at community gatherings and, perhaps most importantly, to listen in on the 167 languages that are regularly spoken there in the street. This unique community is worth investigating to see them in action both politically and socially. It’s a film that looks upon all Americans as immigrants and as something that is healthy. Also commendable is that the open-minded area takes pride in having a gay pride parade.

We note there’s a large gay, Hispanic, Moslem, Haitian, and Asian population who live in the area, and watching how they react among themselves, in public and with other nationalities, is fascinating. Because of Wiseman’s style of shooting in a deliberate slow manner, the camera sometimes stays too long in one place or on a speaker, thereby a tedium sets in. But for fans of the director, like myself, that’s a cheap price to pay for such a fascinating film. 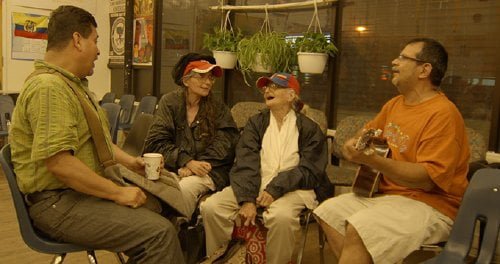