COWBOY UP (RING OF FIRE)

“ I wasn’t a fan of the bull riding sport before or did I become one after seeing the film.”

A competent but unexciting melodrama about professional bull riders that offers no surprises. It’s efficiently directed by Xavier Koller (“Gripsholm”/”Journey of Hope”) and lucidly written by James Radford.

I wasn’t a fan of the bull riding sport before or did I become one after seeing the film.

On his Santa Monica, California, ranch, Hank Braxton (Kiefer Sutherland) is a stock contractor and also performs at rodeos as a clown. His younger brother Ely (Marcus Thomas) is an aspiring professional bull-rider, yearning to be a champ like his dad. It looks like Ely’s promising career is over when severely injured after a fall. But six months later he recovers and gets the itch to ride again despite partnering with his brother to successfully raise bulls on their ranch. When Ely takes off for two months on the rodeo circuit and his nurse girlfriend Connie (Molly Ringwald) doesn’t hear from him, she dumps him for another when he returns. His anguished mom Rose (Melinda Dixon) doesn’t want him to ride and follow in the footsteps of his washed-up former champion rodeo bull-rider father Reid (Pete Postlethwaite), who she dumped a long time ago as a drunk and he has since vanished. Brotherly love is tested when Ely falls for Hank’s hottie rodeo barrel racer Celia Jones (Daryl Hannah) and takes her from him.

When the sports film formulaic storyline kicks in, everything becomes so tiresome that even its tragic incident involving brotherly love seems contrived to fit into its schematic plot and any real feelings for the film get shot down. 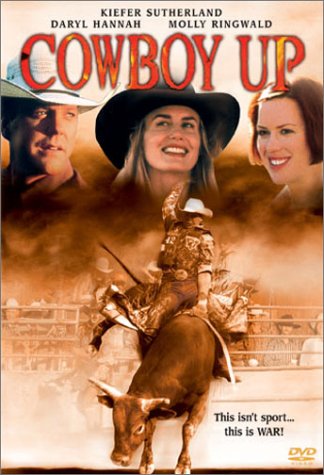