This is a remake of the 1965 Mirage, an amnesia-based thriller which starred Gregory Peck. It was made for NBC, but initially received a theater release. It’s based on the novel “Fallen Angel” by Howard Fast (author of Spartacus). The writers are Quentin Werty (the pseudonym for Quentin Werty) and Peter Stone.This time LSD makes the scientist hero forgetful. Director James Goldstone(“Calamity Jane”/”Rollercoaster”/”Winning”) does a nice job keeping things psychedelic, in a film that’s quite forgettable.

Bradford Dillman plays the scientist Jonathan Fields, who can’t remember why he woke up in a stranger’s apartment with a dead woman in the bathtub. It turns out she’s the mistress of an executive. Before that incident, Fields was unaware that he was drinking coffee with LSD sugar cubes.

To solve the mystery and find out if he’s responsible for the murder, Fields calls in the brusque private eye Arthur Belding (Harry Guardino) to investigate. Fields agrees to take LSD again in an attempt to refresh his memory about the previous night.

It turns out that a worker under Fields, Lew Haley (Pat Hingle), put the hallucinogens in his coffee in order to compromise him in a intricate blackmail scheme, whereby he would get Fields’ esteemed top job at Thought, Inc., a think tank, and also his girlfriend (Hope Lange) if can implicate Fields with the murder.

Michael J. Pollard plays a hippie LSD pusher. Victor Jory, as usual, plays a bad guy. He’s the top executive at the think tank who is being blackmailed by Haley for his extra-curricular affair. The mistress was killed by Haley when she threatened to blab, and Jory later killed the executive for knowing too much. Pollard and Jory are two fine character actors who make any pic they’re in a trip. 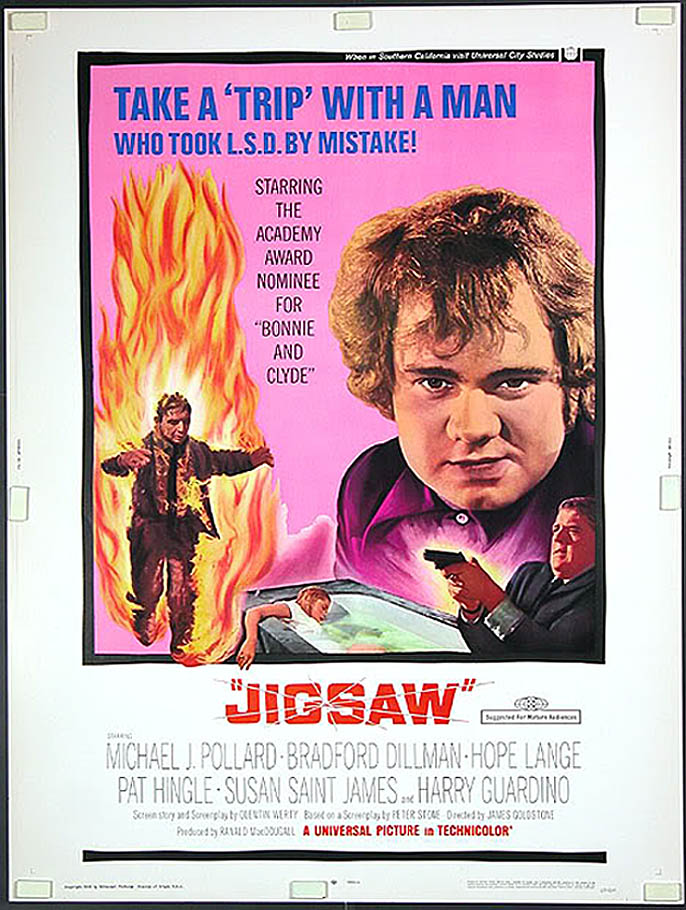