Coroner Creek is a tough, no-nonsense Western taken from a Luke Short novel and written by Kenneth Gamet. This is the first feature film made by the 50-year-old Randolph Scott and producer Harry Joe Brown for their Producers-Actors production company.

In the opening, Chris Denning’s (Randolph Scott) bride-to-be is attacked in a raid on a stagecoach by Indians and uses a knife to kill herself. The Indians were after the large army payroll aboard; Denning is obsessed with going after the white man responsible for the raid.

The villain is an outlaw turned solid citizen Younger Miles (George Macready), who with the stolen payroll bought a big ranch. Miles still has a bad streak him in him, as he’s trying to force out honest rancher Eilers (Della Harms). It takes Denning 18 months to track him down to Coroner Creek, and when he does he comes for revenge. Scott gets the villain by having him fall on the same knife his wife used. The theme being the biblical ‘An eye for an eye.’ This changes at the end, as all the hatred pours out of Scott and he finds love with nice town gal Kate Hardison (Marguerite Chapman). Best scene in the film was the fistfight between Tucker, playing the part of a minor villain, and Scott, where Scott’s shooting hand is stomped on by Tucker. When Scott recovers, he does the same to Tucker. 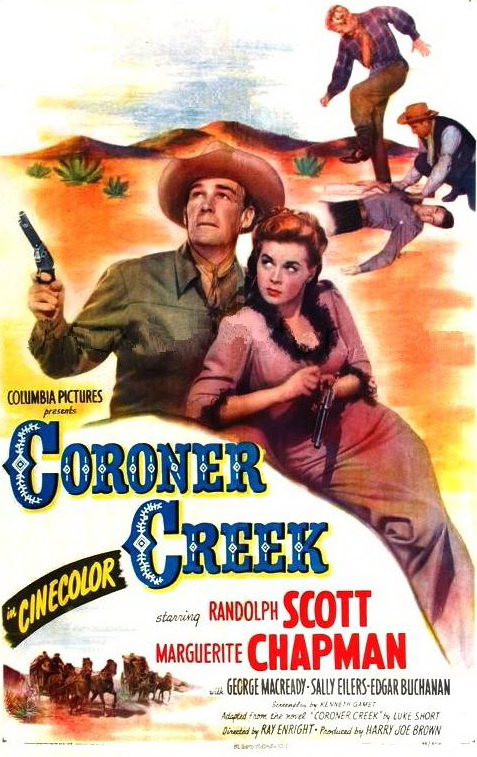