“Routine fast-paced Western that was surprisingly popular during its theater release and is still very popular among NRA members for its unabashed love of guns.”

Routine fast-paced Western that was surprisingly popular during its theater release and is still very popular among NRA members for its unabashed love of guns. It was later retitled Thundercloud so as not to be confused with the American TV series of the same name. Director Edward L. Marin (“Tall in the Saddle”/”Plaza Suite”/”Nocturne”), in one of his last films, does a credible job with the action-packed script by Thomas W. Blackburn.

Two brand-new Colt 45s are stolen from enthusiastic Colt. 45 gun salesman Steve Farrell (Randolph Scott) by career criminal Jason Brett (Zachary Scott), a prisoner in the local jail in Redrock waiting to be transferred to a state prison. The dummy townsmen blame war hero Farrell for the murder of their sheriff, as they think he was working with Brett and helped him escape. They’re too dumb to realize he’s a good guy trying to bring law and order to the Old West by selling only to law officials. A circuit judge refuses to hold Farrell due to a lack of evidence, and after four months in jail Farrell goes after the escaped outlaw hoping to keep the efficient guns (repeating guns that fire off six shots instead of only one) out of the hands of bandits.

When Farrell rescues sole survivor Chief Walking Bear (Chief Thundercloud) from a stagecoach robbery planned by Brett’s gang, who pose as Indians after killing the real Indians and stealing their clothes, they become lifetime friends. It turns out that Beth Donovan (Ruth Roman), the wife of the cowardly Paul (Lloyd Bridges), who was the sole stage passenger, is being used to ride the stagecoach and signal the outlaws if there’s gold on it. She does this task because she thinks Paul’s being forced to work for Brett, but has a change of mind when she learns through eavesdropping that her cowardly husband is a willing participant in the robberies and has big plans to make fast money as he plots with the bandit to take over the nearby town of Bonanza Creek.

Adding to Farrell’s woes, is that the town’s crooked Sheriff Harris (Alan Hale, his last film) is on the payroll of Brett and sets a trap to have Brett’s gang kill him. But that plan never comes to fruition, as Beth escapes from the gang’s hideout after being locked in the storeroom and goes to town to warn the authorities. But she’s shot by her hubby and rescued by Farrell, who brings her to Walking Bear for nursing. Soon Paul is found shot in the back, by Brett, and Farrell teams with the Indians to overtake the gang as they invade Bonanza Creek. 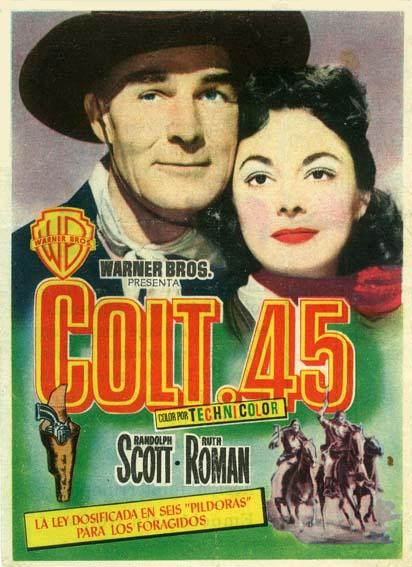