MANHATTAN BABY(EYE OF THE EVIL DEAD; THE POSSESSED)

A derivative Italian horror pic directed by cult favorite Lucio Fulci(“The Beyond”/”Demonia”/”The New York Ripper”). The surreal horror film director has never been one of my favorites. His films, like this one, have been patchy works and the narratives have always been incoherent. The film is adapted from a story by Dardano Sacchetti & Elisa Livia Briganti, who also write the script.

American archaeologist George Hacker (Christopher Connelly) takes his wife Emily (Martha Taylor) and daughter Susie (Brigitta Boccoli) along while on a dig in Egypt, but leaves his 11-year-old son Tommy (Giovanni Frezza) back in the family apartment with the hottie nanny Jami Lee (Cinzia De Ponti). In the Egyptian tomb of a 5,000 year-old god of cruelty, strong beams of light emerge from an amulet and it blinds George when he enters. In a marketplace, a mysterious elderly blind woman dressed in black presents the archaeologist‘s young daughter Susie with an amulet that resembles the one in the tomb, and the blind hag also utters “Tombs are for the dead.”

Returning home to recover in his Manhattan apartment, the professor has his sight eventually return. But the amulet present turns out to be a cursed instrument for evil and it possesses his family. They become instruments for the amulet to kill off the family’s friends. In his son Tommy’s bedroom, it opens up a doorway to another dimensions and teleports people to be killed in Egypt. At last the dim George realizes the amulet belongs to the god Habanoganah and that his only option of survival is to stop this mysterious force by tossing it in the Hudson River and letting the pollution kill it.

Miss Italy of 1979, Cinzia De Ponti, provides some skin beauty and good vocal chords as the besieged nanny. There are lots of horror in-jokes to keep the film buffs on their toes, and rip-off scenes from movies like Poltergeist (1982).

The photography is visually pleasing, but this is one of Fulci’s lesser films—which is another way of saying it really stinks. 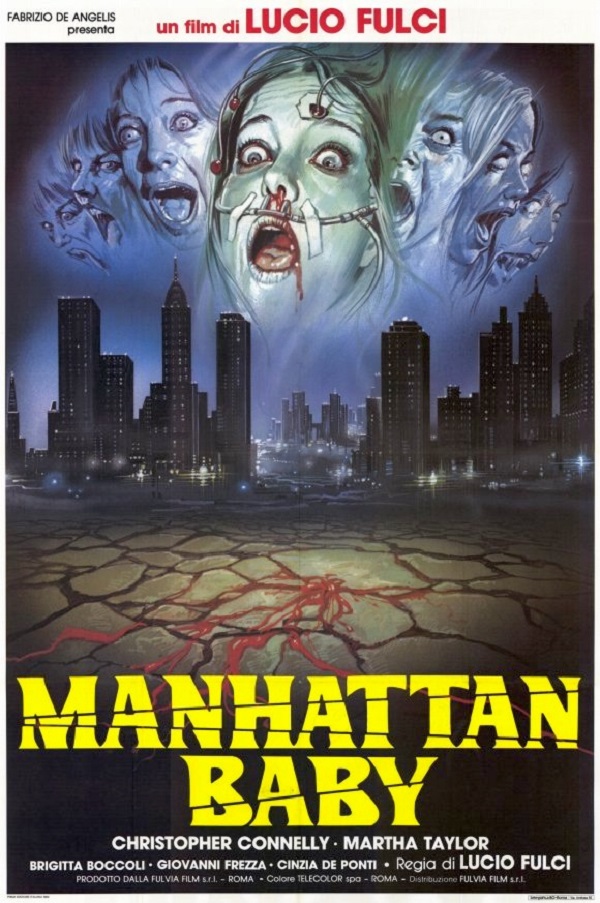