“Provides a severe critique of the family institution”

Bengali writer-director Ritwik Ghatak (“Nagarik”/”A River Called Titas“/”Reason, Debate and a Story“) is recognized widely as India’s second most acclaimed filmmaker, with only the great Satyajit Ray considered his better. The Cloud-Capped Star is the first leg of a trilogy that includesE FlatandSubarnarekha. This film classic from India is set in the late 1950’s in the outskirts of an impoverished Calcutta. The tragic melodrama involves a refugee middle-class family, victims of the 1947 Partition of East Bengal, who are struggling to survive their poverty and loss of cultural values.It’s based on a story by Shaktipada Rajguru.

The struggling impoverished family consists of the frail elderly useless father (Bijon Bhattacharya), the conniving whiner mother (Gita De), the irresponsible oldest child Shankar (Anil Chatterjee), the hardened younger brother Mantu (Dwiju Bhawal), the self-sacrificing older sister Nita (Supriya Choudhury) and her selfish callow younger sister Gita (Gita Ghatak).The central character is the soft-hearted saintly Nita, who is forced to drop out of the university and take an office job to support the uncaring family when her father has an accident and can no longer keep his low paying job as an elementary school teacher. Shankar is a talented aspiring singer but a lazy loafer, who receives money from the generous Nita to get haircuts and buy tobacco. Mantu has mooched rupees from Nita when his parents fail to provide. He soon drops out of school to get a factory job and live in a factory hostel, saying he would do anything to get away from this exploitative family. When Mantu has an accident, he’s forced to return home. Nita’s timid scientist boyfriend Sanat (Niranjan Roy) is trying to get a scholarship to complete his doctrate in physics. When Nita says she can’t marry him now, that she must support her family, a disappointed Sanat is seduced by Gita–with her mom’s approval. The wily Gita ecourages Sanat to get a job and marry her.

The manipulative ‘mother from hell’ makes sure the uncomplaining Nita is the family breadwinner, while the weak father says this is wrong but does nothing to prevent this injustice. As a result the industrious Nita loses her aspiring career opportunities she would have had with more education, loses the one she loves, loses her youth and eventually loses her health and life by contacting tuberculosis. Ironically, Nita when sick becomes a burden to her family, and has fits of madness that reflect she’s becoming dehumanized and losing her wits while in denial of her suffering.

The well-crafted powerful film, while remaining unsentimental and elegant, provides a severe critique of the family institution, the difficult social and economic conditions, and the ill-effects of taking on too much of a burden without speaking up so that one’s personal growth is not stunted and one’s life is not placed in the hands of others. The nuanced film depicts how life can be especially trying for a woman in India, and how difficult it is to get away from one’s bad karma family. It has an innovative soundtrack, where nature’s sounds and the sounds of pain and joy can be clearly heard through avant-garde advanced sound effects. The filmmaker also creates an unusual sensitized experience for his luminous black-and-white film, highlighted by songs breaking out throughout, with Nita and Shankar beautifully singing a duet of a melancholy Rabindranath Tagore poem.

The disintegration of the middle-class family is traced to losing the right family values for the wrong ones. On a political level Nita is a metaphor of an exploited India being dragged to ruin by selfish interests and divisions in the country. This is a masterpiece. It deserves many viewings to delve into its many layers that range from the obvious critiques of a society mired in helplessness to the more subtle philosophical musings. They tell about how even education as a traditional way to improve one’s lot in life is being bandied about as merely a tool for careerists and not itself worth its weight in gold. 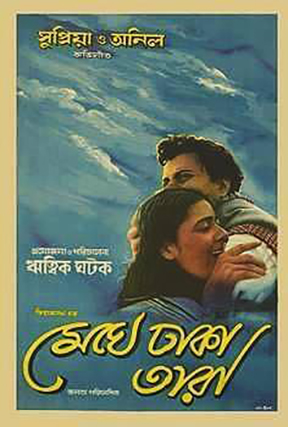