“The performances are stagy but filled with fiery emotion.”

After ten years of being away from home and chasing a romantic dream that didn’t pan out Mae Doyle (Stanwyck) returns to the small fishing village of Monterrey, where she was raised. Mae tells her handsome brother Joe (Andes), who is not happy to see her–but accepts her back into the family house anyway– “That she left town with big ideas, but got small results.” Joe’s girlfriend is the sexy Peggy (Monroe), a 20-year-old worker in the cannery, who is naively enamored by Mae’s adventurous life. She is in the midst of fighting with her conservative beau, as she wants to be viewed as a liberated woman.

Clash by Night is about a bitter love triangle that is filled with sardonic characters, all of whom are lonely and searching for love. This Odets’ work was originally performed as a neo-realist Broadway play in 1941, with Tallulah Bankhead in the Stanwyck role. Fritz Lang changed the locale from Staten Island to a fishing village in California, but kept intact the oppressive seacoast atmosphere.

Mae has become cynical and is tired from running away from her problems, and of being vulnerable. She meets a good-natured widowed fisherman she knew from the past, Jerry D’Amato (Douglas), whom she doesn’t love. But when he falls for her sophisticated ways and good looks, they marry against her better judgment. She thinks this marriage will give her a stable life, one in which she can feel secure. The problem arises when Jerry pushes his close friend on her, a movie projectionist, the cynical and crude Earl Pfeiffer (Ryan), making them become friends. The only thing that makes her happy with the marriage, is that she has a baby.

After sleeping off a drunken binge in her house, celebrating his divorce from his wife, Earl takes hold of Mae. She can’t resist anymore and tries to make a relationship with Earl work, fed-up that Jerry is so dull. But trouble arises when Jerry’s vindictive uncle (Naish) tells him about the affair and he goes berserk. All the suppressed emotions of the three now arises, as each tries to fight for what is theirs.

The performances are stagy but filled with fiery emotion. The performers are able to bring out the complexities underlying each of their characters as they battle each other, hoping not to die of loneliness or of cynicism. Everything about these characters and their alienation seemed natural something that was grounded by Lang’s showing them at work, never cutting them off from all the other travails they were going through. Lang’s point is how easy it is not to see the faults in yourself, as easy as it is to see them in someone else. Clash by Nightbrilliantly tells how some lonely folks break out from their shadowy existence, as if that darkness was a prison where survival at any cost is the name of the game. 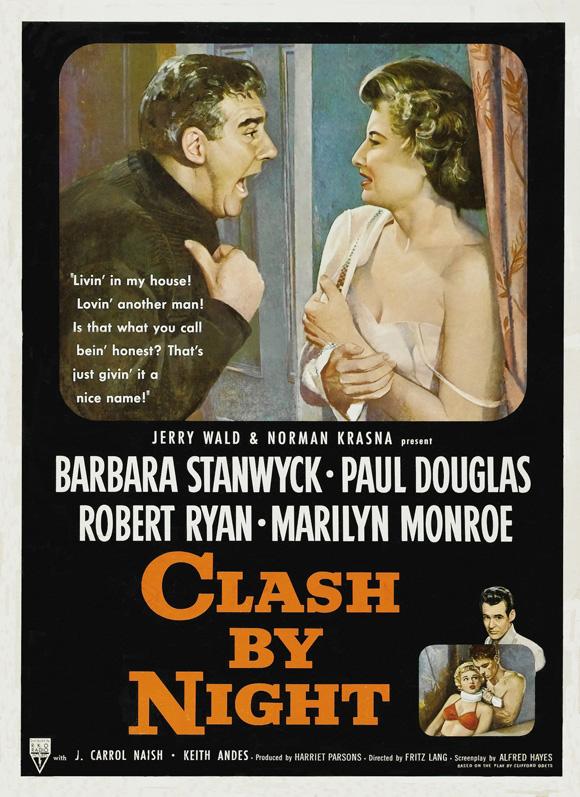