Citizen Ruthwill not gets its hands dirty by taking a side in this controversy raging about the abortion argument waged by pro-choice or pro-life forces. It takes place in an unnamed southwestern city, supposedly a representative place of how Middle America is thinking. Though the film subtly shows its hand in favor of the feminist side of the question it still mostly chooses, instead, to overtly attack both sides for caring only about their opinions and not about the individual concerned. The film’s weapon of choice in this attack is satirical comedy and not preaching.

The main focus of the film is on Ruth Stoops (Dern) who is a sniffer of chemicals, an alcoholic, and all-around dead-beat. She has numerous arrests and scores of failures in the court’s substance abuse program. This time she is caught sniffing a patio sealant and is also pregnant while unmarried for the fifth time. None of her children remain in her custody. So the question becomes, what should society do with her.

The film will not offer its opinion about what to do with this nonredeemable idler, but instead chooses to attack both sides of the abortion argument. This leaves us wondering how much the filmmaker really cared about Ruth. She seemed to be used by them for the purposes of making this film, in the same way they are accusing both sides of using her in the abortion issue. Is their answer that she is hopeless and we shouldn’t waste our time with her problems? They offer no solutions for her drug abuse, which is just about where the current political climate in America is, anyway. So it doesn’t really surprise me that a film tackling a taboo political subject such as this one, should be so cautious and centrist in its views. But what bothers me is that this film came on pretending to be “hip” to the problems of the homeless, when it is clearly just using them to advance their cause of comedy. Anything for a laugh.

The judge decides to charge Ruth with a felony of endangering the life of a fetus through drug abuse and will only reduce her sentence if she agrees to an abortion. While in jail, she meets some members of a Christian pro-life group called “Baby Savers”. They vow to help her and start by bailing her out into the home of one of their leaders, Norm Stoney (Kurtwood). He is a blue-collar family man, with two children, a young boy who builds model airplanes and a teen-age daughter who is a tramp (the family doesn’t know this). Norm echoes all the obnoxious slogans and dogmas and hypocrisies of his fundamental Christian beliefs. At work he is humbled by his department store manager, who deplores him for bringing his cause into the workplace. Yet among his group members and his wife, he is a pillar of strength for the cause.

When at the Stoney’s, Ruth realizes she is at the center of a national battle between pro-life and pro-choice forces. The dim Ruth is a “huffer” (sniffer of any chemical in a paper bag) and is only interested in satisfying herself; in other words, she is not a very sympathetic person. If there is any excuse offered for her behavior, it is that she was an abused child. The Stoneys are not her kind of people, and their insistence that she keep the baby does not play well with Ruth. So things take a bad turn there, and she is turned over to another household of pro-lifers. But the catch is she is turned over to Diane (Swoozie), who is a spy for the pro-choice group. She now influences Ruth to get the abortion. In her camp we meet a crazed ex-Vietnam Special Forces veteran Harlan (M.C.), who handles security for the group. And we see that there is a lesbian relationship between Diane and Rachel, another pro-choice group member. Ruth does not identify with these do-gooders. Both groups are the “Haves” to her.

Everyone in the film is stereotyped: the pro-lifers are Republicans, religious fanatics, family value people, sexually repressed neurotics, drivers of station wagons, and self-righteous bigots. The pro-choicers are Democrats, lesbians, freaks, pagan worshipers, and those with loose morals who are godless. Ruth is also a stereotype, she is depicted as what white trash druggies are thought of in America. She is also seen as childish and irresponsible, someone who must find instant gratification to exist with no salient values, and who is not looked upon as being a real person.

With the stakes raised by the national attention on this fight, the local groups call in the heavy hitters from their national headquarters. Again, the arguments against both sides is handled in an even-handed manner. Both leaders are viewed as hypocrites. Burt Reynolds is the wealthy pro-life minister of the Baby Savers group. Burt flies in to offer his help and the group’s resources to fight to save the baby. This group offers Ruth initially $15,000 to have the child, but doubles the offer on Burt’s insistence. His family value argument is underscored by the “boy slave” he keeps in tow.

The pro-choice group calls in their wealthy national head Tippi Hedren, who pushes her weight around and relishes in the publicity. When Ruth is about to jump at the $15,000 + the pro-life group offers, Harlan matches the money on his own. That is money he settled with the government for on an Agent Orange claim (this offer seemed incredulous!). It comes apparent to even the dim Ruth that both sides are using her as a political pawn. That Ruth’s only hope is to look out for number one.

The only thing that can save this film from its cautious stand, is what you thought of Dern’s performance. She is the only character in the story who is allowed to grow out of her one-dimensional role, albeit, only into a two-dimensional one. And that is the rub, it can’t get beyond the absurd nature of its satire, as everyone in the film remains a cartoon figure. So the outcome should come as no particular surprise when we see Ruth rejecting both political sides and floundering along on her own; she is last seen with a gun and a bagful of cash, running down an alley to escape from all sides. Could this really be Payne’s idea of how to resolve the issue? As for Dern’s grating performance, it failed to evoke concern for her plight. By the film’s end she still appeared to be white trash, to be laughed at and dismissed as someone society can’t help. The entire film’s satire was a futile effort at comedy. Its weak position on the issues allowed it to throw stones at everyone and seem like it was hip to what was going on, but in reality it changed no one’s mind about abortion; and, in the bargain, it wasn’t a particularly funny film. 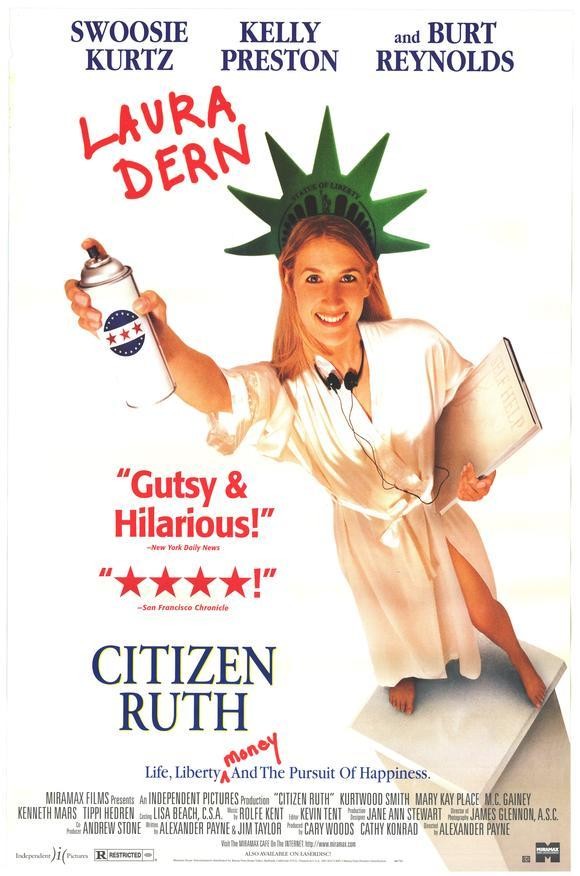