“If too much charm can kill, this emotionally manipulative nostalgic love letter to cinema directed and written by the 32-year-old Giuseppe Tornatore is a killer.”

If too much charm can kill, this emotionally manipulative nostalgic love letter to cinema directed and written by the 32-year-old Giuseppe Tornatore is a killer. Vanna Paoli is co-writer with Tornatore. Too long in both its theater released version of 123-minutes and its 173-minute video release (mostly restoring meetings between the film’s star-crossed lovers, actually making the girl the pivotal point of the story and not the projectionist as was clearly the case in the earlier version). It won the 1989 Best Foreign Film Oscar and it won a special jury prize at Cannes.

Successful Rome filmmaker, the fiftysomething Salvatore (Jacques Perrin), receives a call from his mom in Sicily whom he has not visited for thirty years that Alfredo (Philippe Noiret) has died. Sal returns to his small Sicilian village hometown for the funeral and the film goes into flashback to explain his relationship with the gruff peasant movie house projectionist who was the most important influence in his life (his dad was killed in the war). The film divides into three periods: Sal as a precocious 10-year-old (Salvatore Cascio) during the WW II period, who sneaks into the movie house and catches a priest censor a kissing scene. Sal then wins the reluctant Alfredo over and gets him to show him how to be a projectionist and picks up his love for the cinema, while saving in a can the film censored by the priest. Their scenes were far too cutesy. The second part has Sal as an adolescent (Marco Leonardi), who after his mentoring surrogate father is blinded in a fire in which he saved him, where supposedly all the film is destroyed, takes over as projectionist; Sal then falls in love with a beautiful blonde banker’s daughter Elena (Agnese Nano), his classmate, but loses her when he goes into the military. The last part deals with Sal as the famous filmmaker, who rues over not marrying the love of his life Elena (Brigitte Fossey)–now married to a local and with a daughter. It’s most affecting scenes have Sal showing the hoarded censored clips (inexplicably surviving the fire), found by the site of the old movie house. This retrieval serves as a sugary recognition to the romance of the cinema.

Everything about this sentimental middlebrow film registered as too simplified in both its politics, idealized Sicilian village and movie history. It never moved me as much it wanted to by piling on the goo, making me instead indifferent to its clutching efforts. But for those who get their kicks out of having a good cry, this tearjerker has plenty to cry over what’s been lost. 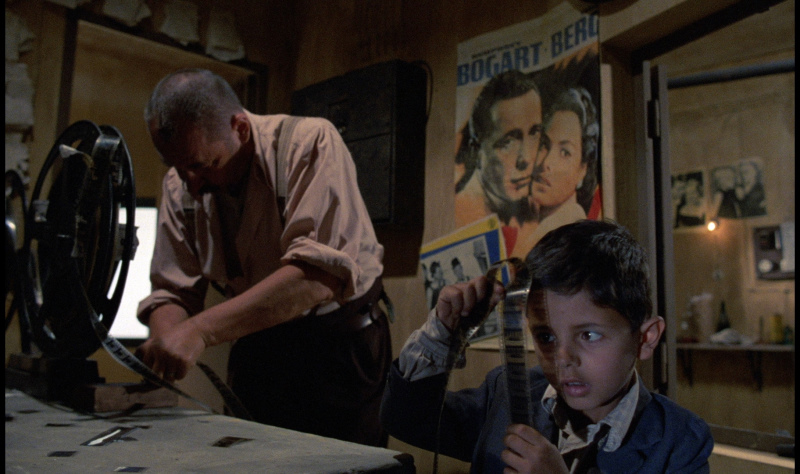