Abner Biberman’s film noir asks the question: Are mental patients released too soon from mental institutions? The answer turns out to be a resounding yes. This tale about a handsome schizophrenic 27-year-old named Roy Turner (Ray Danton) is an unconvincing case study of a mental illness, as the character is portrayed sympathetically despite his lapses into violence when upset. It’s based on the Cosmopolitan magazine story by Owen Cameron and the screenplay by Gene Levitt.

Roy is released from the Woodlands State Hospital because the facility is overcrowded. His caretaker, Dr. Crawford, argues with his supervisor that Roy might not be ready to make it on his own, as he’s afraid that his inmate patient still might not be prepared to handle stress.

Warning: spoiler in the nextparagraph.

In Los Angeles, Roy freaks out and bolts at a job interview over being asked routine employment questions. He takes a Greyhound along the California coast and on the spur of the moment decides at a rest stop to stay indefinitely at a sleepy coastal town because a gas station mechanic, Hank Hansen, was friendly and he likes the peaceful beach area. Roy ends up staying at the Seaside Cottages, where the owner’s attractive 22-year-old daughter, Susan Mayes (Colleen Miller), responds favorably to his love interest. With a job tip from Hank and encouragement from Susan, Roy lands a job as a draftsman. Things seem rosy at this point, but Mr. Mayes (Willis Bouchey) puts a damper on that by inquiring about Roy’s past and then confronting him. The possessive father’s suspicions about the stranger are verified in a letter he receives about Roy’s mental illness and he orders Roy to leave his premises at once or he will have him recommitted. After Mr. Mayes calls him shiftless and a lunatic and threatens to tell his daughter, Roy becomes so enraged that he becomes a crazed killer. Roy carefully covers up the murder to make it look like a robbery, but clues soon start popping up that implicate him. While walking with Susan on the beach, he confesses the murder and attempts to kill her by throwing her off the cliff into the water. When Roy sees a seagull flying over head, pleasant childhood memories return and he regains his sanity. Roy rescues Susan and then gives himself up to the police.

The film, in a one-sided argument of stacking all the cards in its favor, blames society for not giving such a sick person the proper care, as it points out that Roy is not morally responsible for his criminal actions. He is portrayed as a bird lover, who admires them for their freedom of flight–something he can’t do. And, he is also portrayed as someone who probably could have adjusted to society if he received the proper treatment.

Danton’s performance was restrained, ably showing that his clamor for normalcy was a driving force for both his progress and ultimately his downfall. But Danton’ fine performance does not a picture make. The film’s too many clichéd moments, uninteresting melodrama and heavy-handed enlightened view are just too much to overcome by the actor. 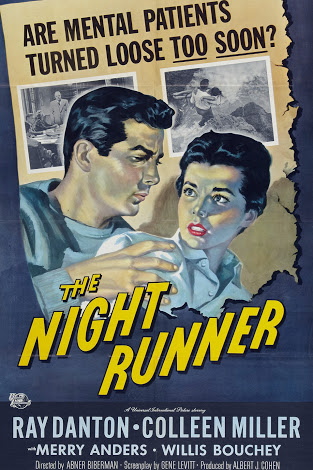