“The mock-heroic bagatelle, a risqué undertaking at the time, still shines today with its shrewd commentary on human nature.”

It’s a lighthearted sex farce and period costumer, set during the early 17th century war between the Dutch and Spanish in the village of Boom in Flanders (abutting Belgium, France and the Netherlands). Flemish born writer-director Jacques Feyder (“The Kiss”/”Therese Raquin”/”Carmen”), who as a young man lived in France, bases his story on history but keeps it as fiction, and has said his main aim was to bring to life the Flemish Renaissance paintings—something he certainly did. Feyder’s wife Francoise Rosay stars and steals the film as the wily wife of the burgomaster. It’s cleverly written by Robert A. Stemmle and Bernard Zimmer, and is based on the story by Flemish author Charles Spaak. The film was resented by the men of Belgium, who were portrayed as cowards hiding behind the skirts of their women. The Nazis were identified with the Spanish invaders and during the country’s Nazi occupation five years later, Feyder was falsely accused of advocating collaboration and was wise to go into exile.

The small village of Boom is aghast that in 1616 a large invading Spanish army plans to pass the night in their community and the four-man army deserts. The burgomaster’s wife Cornelia (Francoise Rosay) takes over organizing things, as her cowardly and blustery hubby (André Alerme) plays dead. Cornelia and all the other women greet the invader’s leader, Spanish Duke Olivares (Jean Murat), and his army, as heroes and shower them with affection, food, sexual favors and hospitality. This way they avoid the destruction of their town, and before the duke leaves he orders the cancellation of taxes for one whole year.

Russian designer Lazare Meerson’s marvelous sets and costumes bring on memories of the painter Breughel, and one of the film’s characters is indeed named Julien Breughel (Bernard Lancret). He’s an artist courting the burgomaster’s pretty 16-year-old daughter Siska (Micheline Cheirel), who steals her away from the vulgar and cowardly butcher (Alfred Adam) her father promised her to. The legendary Austrian art director Alexandre Trauner collaborated with Meerson to erect a replica 17th century village in the suburbs of Paris at the Epinay. Also the sparkling black-and-white photography by the American cinematographer Harry Stradling deserves praise.

Louis Jouvet makes a menacing, greedy Inquisition priest, who is assisted by a nasty dwarf (Delphin).

The mock-heroic bagatelle, a risqué undertaking at the time, still shines today with its shrewd commentary on human nature. But I found its collaboration scenario a bit too pleasant and unrealistic for my taste, as its gratuitous joviality began to wear on my nerves. 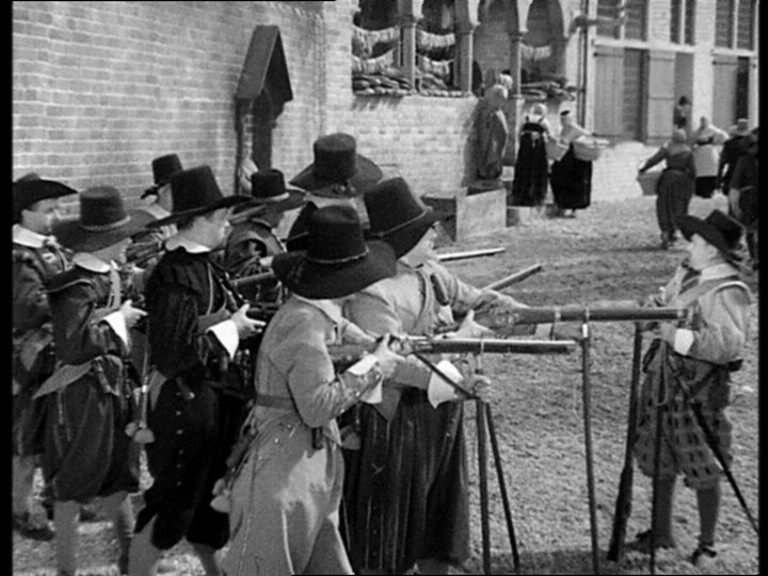