“A vulgar and lackluster version of Cole Porter’s musical set in Gay Paree in 1896.“

A vulgar and lackluster version of Cole Porter’s musical set in Gay Paree in 1896, that did reasonably well at the box office but was skewered by most critics. It tells of the negative reaction by the authorities to the introduction of the notorious can-can dance, and of a love triangle among the participants involved in the court battle over the new dance. Director Walter Lang (“Mother Wore Tights”/”State Fair”/”The King and I”) keeps it tired and stale. It’s based on the hit play by Abe Burrows (ran on Broadway from 1953 to 1955) and is written byDorothy Kingsley and Charles Lederer.

The highlight of the film are the engaging Cole Porter songs and the Apache dance by Shirley Maclaine (Juliet Prowse provides the other lively dancing).The songs include: C’est Magnifique, l Love Paris, Let’s Do It, Come Along With Me, Maidens Typical of France,Live and Let Live,You Do Something to Me, and Just One of Those Things.

If you dig the music (really the only thing about the film that wasn’t tedious), I’d suggest you get the soundtrack and avoid the overlong film.

Simone Pistache (Shirley Maclaine) is the perky low-life cafe owner determined to keep the can-can performed in her Paris cabaret, in the Montmarte district, against the slings of French moralists. The dance has been ruled lewd and banned by the authorities, and the police raid Simone’s place. François Durnais (Frank Sinatra) is her lawyer boyfriend who fights hard to keep her out of prison by telling the court of the artistic merits of the daring dance. The high-class, humorless and straight-laced young judge hearing the case is Philippe Forrestier (Louis Jourdan). His boss, the elderly chief judge, is Paul Barriare (Maurice Chevalier), a close friend of François’s who would love to dismiss the case. Simone has bribed the police, and is released from custody due to lack of evidence. Philippe goes unrecognized to the club as a rich patron and gets Simone to blab about the bribery. But rather than do anything to harm Simone, Philippe falls for her and lays a kiss on her. In gratitude for not arresting her, Simone returns his kiss. He then proposes, if you will. Simone turns him down and asks François to propose. When he refuses, she tells him that she will then marry Philippe. It’s all as ridiculous as taking Sinatra andMaclaine for Gallics. The story ends with the lawyer and sassy cabaret owner getting back together, and the dance finally winning approval by the public.

When Russian leader Nikita Khrushchev visited Hollywood, he was taken to the studio to watch them film a scene. He then ripped the film as indecent. Who knew he was such a good film critic? 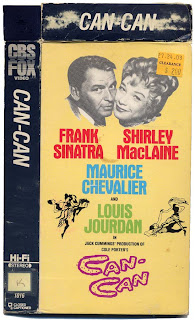