“A sizzling Brazilian real-life documentary by director Jose Padilha that outdoes reality TV in its dosage of reality.“

A sizzling Brazilian real-life documentary by director Jose Padilha that outdoes reality TV in its dosage of reality. It effectively uses both selected video footage taken for Brazilian television and post-incident talking-head interviews with sociologists, journalists, former street kids, the hostage taker’s aunt, men caught in the revolving door of poverty and prison, and police personnel– including SWAT team members who responded that day, as one of them speaks from anonymity hidden by a ski mask and with his voice electronically altered. He offer a chillingly dispassionate and mind-boggling account of the police’s inexcusable tactical failures.

The filmmaker never eases up in his search for forthcoming answers on how botched an effort took place when Bus 174, at the stop of Jardim Botanico (the Botanical Gardens) in the heart of Rio de Janeiro, was hijacked on June 12, 2000 by a lone crazed street kid, 21-year-old Sandro do Nascimento. He was waving a gun as he held eleven frightened passengers hostage, which sparked a tense standoff as the gunman went into an incoherent rant while he constantly threatened to kill his hostages though making no demands. It ended after four hours in heart-wrenching tragedy and chaos, where death is caught on camera. The tragedy was further heightened because it could have been averted if the authorities weren’t so incompetent, and by the fact it was seen by millions in its entirety on TV.

Sandro is seemingly insane or under the influence of drugs, as he holds his frightened victims captive as police authorities–and television cameras–surround the parked bus and prevent it from moving. The poorly trained police made a series of initial mistakes, including not clearing the area and roping it off and of allowing reporters and TV cameras to be in the middle of the scene and thereby dictating the course of future action. The police were clueless on what was the correct procedure to follow because of their inadequate training, and to complicate things further they received bogus orders not to kill hijacker on national TV from politicians who assumed charge of the situation while far from the crime scene. The police therefore missed numerous opportunities for snipers to kill the gunman, as he repeatedly poked his head out the window while waving his gun. The police stood their ground for four hours and futilely tried to talk the hijacker into giving himself up but without ever establishing his motive were unable to intelligently communicate with him. Meanwhile, the television cameras recorded every shocking detail in its entirety, which gripped the stunned nation with a sense of disbelief at their inept police.

The filmmaker details Sandro’s wretched life of growing up in poverty without a father and watching his mother be stabbed to death in a robbery when he was ten, and as an orphan leaving his poverty-stricken Boa Vista community (on the outskirts of Rio) to live eventually on the streets of Rio. He survived by becoming a panhandler and mugger of rich people in the touristy Copacabana area while living on a well-populated sleeping spot for the homeless in front of the Candelária Church, where one night in 1992 the undercover police brutally massacred seven of his street kid friends. Sandro was viewed as one of those invisible street kids turned into a hopeless criminal figure, someone in and out of the overcrowded juvenile detention and prison centers, a glue-sniffer also hooked on cocaine, and an unfortunate who finally cracked in a big way.

Padilha’s unflinching thriller has far-reaching social and political implications, as well as boldly giving voice to Sandro also being a victim of the tragedy. There can be no easy answers, only a lot of inconsolable grief as this film serves as an official record of that tragic day. “Bus 174” as a bloody outrage is much like ”City of God,” but this film is without the sense of exploiting the tragedy unlike the more pretentious Fernando de Meirelles’s fictionalized true story. 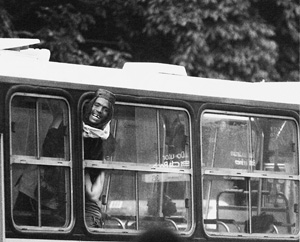 ONE DAY IN THE LIFE OF ANDREI ARSENEVICH (UNE JOURNEE