Writer-director Jody Hill (“The Foot Fist Way”) says he was inspired by “Taxi Driver,” but Observe and Report mostly follows the arc of the vulgarian badass “Bad Santa” that shamelessly aims to make the viewer uncomfortable laughing at the film’s crudeness without giving it a further thought. It does not dare to drive into the psyche’s dark territory as did Scorsese armed with things to ponder about such violent fantasies his antihero displays. The superficial film works best when it has the guileless, socially awkward, oafish, fearsome looking short cropped-hair suburban shopping mall security guard, Ronnie Barnhardt (Seth Rogen), acting nutso, moronic, bigoted, violent and dropping f-bombs. But when it wrestles with its conscience and tries to come up with something relevant to say, it gets slapped down for trying to be something it’s not—a smart film.

It’s not a good film, but it’s a funny one; goofy entertainment with a strange sense of humor that relies on its misanthropy, bleakness and the relentless bad behavior of its narrow-minded bigoted antihero protagonist to get laughs. It follows Kevin James’ appearance in the family comedy of “Paul Blart: Mall Cop,” with him playing a cuddly mall cop. But Observe and Report is no sweet family comedy. It focuses on an unhinged loser semi-retarded shopping mall security guard aspiring to be a bona fide cop who carries a gun–with owning a gun and having power being the things that push his macho buttons.

The pathetic Ronnie is the head security guard at the Forest Ridge Mall shopping center (shot on location in the abandoned Winrock Mall in Albuquerque, N.M.) and lives at home with his single drunkard slutty mom (Celia Weston), whom he cares for without complaining (which shows off his good side). The delusional, power-hungry, overweight, angry, bipolar, anti-social, racist security guard, gets a charge out of dressing down his loyal staff of weaklings (made up of wimpy twin Asians-John and Matt Yuan, a subservient Hispanic-Michael Peña and one feather-brained white security guard-Jesse Plemons); beating on trespassing skateboarders; insulting on a daily basis a fiery Moslem mall worker in a kiosk selling lotions, someone he calls Saddam (Aziz Ansari) who feels so harassed that he has taken a restraining order out against him; hitting on ditsy buxom blonde slutty and vulgar party-girl cosmetic salesclerk Brandi (Anna Faris), his dream girl; and patrolling the mall feeling all pumped up with delusions of grandeur. When a flasher (Randy Gambill) exposes himself in the parking lot, the self-important Ronnie cherishes it as the chance of a lifetime to be heroic and resents that the mall manager, Mark (Dan Bakkedahl), calls in the real cops after Brandi is flashed in the parking lot by the pervert and goes into hysterics. Arrogant police detective Harrison (Ray Liotta), opposed to Ronnie, conducts a real investigation and exposes Ronnie as a rent-a-cop to be heckled.

But Ray’s insults don’t stop Ronnie from aspiring to be a bona fide policeman. So he fills out an application and assigns himself to ride along with Ray, and when Ray spitefully leaves him stranded on a dangerous drug buying intersection Ronnie surprisingly overcomes a group of vicious armed drug dealers with his brutish fighting skills and arrests an underaged kid for selling crack.

There are two politically incorrect laugh-out-loud scenes that provide most of the film’s belly laughs. The first has Ronnie, off his meds while his date Brandi is on his meds and tequila. With that scenario Ronnie date-rapes Brandi, who is barely conscious enough, with puke dripping out of her mouth, to tell him to keep humping when he becomes sensitive for a moment and stops (a scene which some might find more sicko than funny); the second whopper takes place during his psychological evaluation for admission to the police academy, where Ronnie confidently informs the psychologist (Fran Martone) that “At this point in my life, I feel like I could destroy some motherfuckers!”

Faris’s physical comedy is superb, while Michael Peña as Ronnie’s second in command falsetto sounding and lisping security guard offers a funny but sad look at a bromance gone sour. All the while, the delusional Ronnie parodies the fantasies of Travis Bickle, as he finds an ideal mate to rescue in the sweet but clichéd “born-again virgin” Nell (Collette Wolf). She’s a verbally abused coffee shop worker at the mall’s Toast A Bun, who the belligerent Ronnie rescues from her bullying boss Roger (Patton Oswalt) who constantly makes nasty comments about her laziness due to her temporary foot handicap that requires her to wear a cast and sit down on the job.

This irate misfit-turned-hero low-brow comedy doesn’t paint a rosy picture of its mall security guards working at deadend positions, but it leaves us with the feeling that it did latch onto some real proles no matter how absurd they may seem. One can certainly question the exploitative nature of the film and how it used these misfits to get a laugh at any cost from their sad predicament and offered no true moral reaction over such a piggish main character. How much you are entertained by such a crass comedy depends on your outlook of what’s funny; but it is well-acted and not as unreal as one might think, though its situations are obviously exaggerated for shock effects. 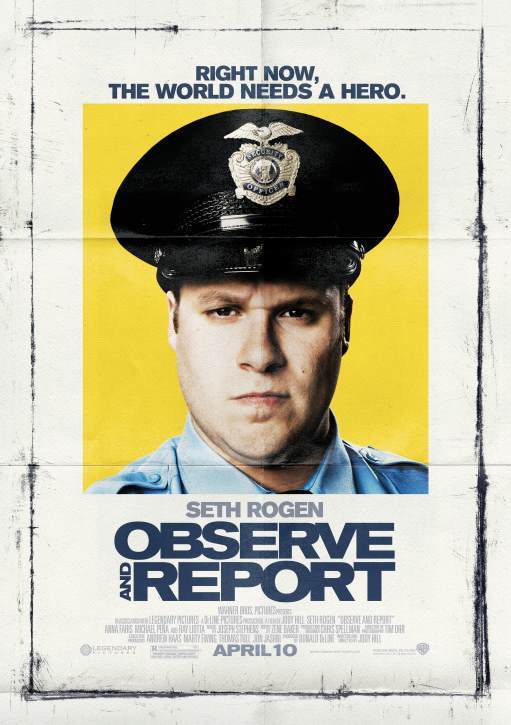