“Its plot features the stale idea of a woman on the bottom rung trying to climb the social ladder.”

A stiff one-idea romantic comedy that is based on the unperformed play by Ferenc Molnar “The Girl from Trieste.” One of Hollywood’s few women directors of the studio era, Dorothy Arzner (“Fashions for Women”), helms it as if it were a fashion show and the plot were secondary. Its plot features the stale idea of a woman on the bottom rung trying to climb the social ladder. The heroine is no longer a prostitute, as in the play, but an ambitious cabaret singer who when she tastes the sweet things in life can’t go back to her poverty. The film’s co-stars, Joan Crawford and Franchot Tone, were married in real-life; this was the last of the 7 films they would make together, as their marriage was on shaky grounds because of Tone’s womanizing and Crawford’s decline as a star.

Count Armalia and Rudi Pal are aristocrats getting drunk on champagne in Trieste’s best hotel. The Count believes that what separates the rich from the poor is their birth, that if attired the same you couldn’t tell them apart. To prove his point the Count goes to the seediest cabaret in town and blindly offers a no-lose proposition to the club’s singer Anni (Joan Crawford) to spend two weeks at an exclusive resort in the Tyrol with all expenses, including clothes, paid for by him.

The humble nature loving and flute playing village postman Guilio (Franchot Tone) falls in love with the beautiful Anni the moment she arrives by train. He gives her a ride in his donkey cart when the hotel doesn’t send a car because they didn’t get her telegram in time. But Anni, who now goes by the name Anne Vivaldi, has a bigger fish in mind to reel in when the wealthy Rudi Pal makes a play for her even though he’s engaged to Magdalena Monti. Her deception as a society lady works for two weeks with the help of Maria, a hotel maid Anni knew from before, and the waiter Alberto, a cousin of Guilio’s, who was told to look after her. But Anni decides to stay on after her two weeks are up, as she tries to rope Rudi into marrying her. She does this despite not having the money to pay for her extended stay. She hooks the womanizing Rudi, but the Count sends a telegram to Magdalena’s parents, Admiral Monti and Contessa de Meina, advising them of his experiment. It now becomes a matter if she chooses love over money, and marries the courting postman.

It was too trite and familiar a tale, and the cynical Crawford character gave me no reason to root for her to choose love over wealth. The title comes from the Crawford character bringing to Tyrol a flashy red dress that labels her as being from a cheaper class; it’s the kind of sexy dress no society lady would wear in the elite circle she’s clawing to join. 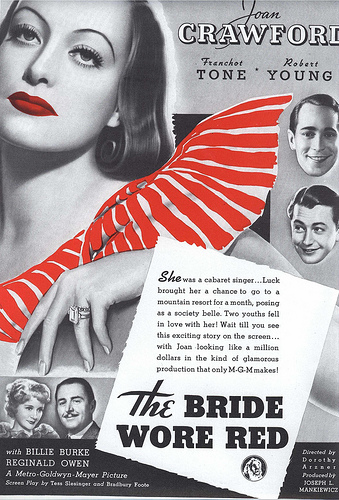