“A below average B Western.“

A below average B Western directed in a lackluster way by Ray Taylor (“Outlaw Country”/”West of El Dorado”). It’s based on a story by Forrest Brown and is stiffly written by Frances Guihan. Rancher Retta Lowrey (Muriel Evans) inherited her ranch from her deceased father, and lives on it with younger brother Sonny (Dickie Howland). While Retta has dinner with boyfriend rancher Steve Hanson (Buck Jones), the baddie town manager Jake Wagner (Walter Miller) comes by to inform her that her father sold the ranch to him without her knowledge (if you can believe that, you might be sucked into liking this unoriginal film). Buck sniffs out something not kosher and teams with the visiting tramp Jim Lynch (Harvey Clark), who is an undercover government investigator, after a wanted forger named Sam Carson (Matty Fain). It’s discovered that Carson works for Wagner as Sam Leavitt, and forges house sales of deceased ranches that Wagner keeps. The other lead villain is Starr (Lee Phelps), who killed the local parson because he discovered the gang kept the counterfeit machines in a tunnel below the trap door in his church. The film’s best line has Buck tell the baddie Phelps: “I’ll choke your Adam’s apple till you taste like cider.” 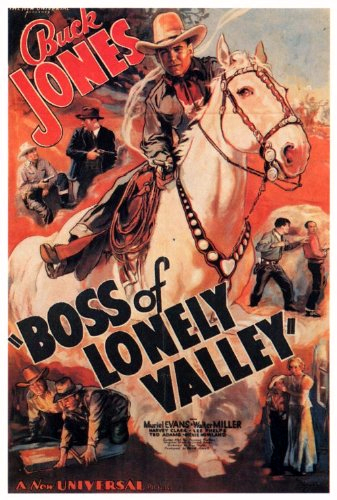