“At least, it comes without the moral piety of an Oliver Stone film.”

The main story in Boiler Room soon becomes tiring and the secondary story is underplayed, and the other subplots are pointless, so what you really get is a compromised film.

The main story is a homage to the movie “Wall Street” and its message of greed. But, at least, it comes without the moral piety of an Oliver Stone film. This drama revolves around a 19-year-old college dropout, Seth (Giovanni), running a successful 24-hour illegal casino out of his apartment, who switches careers because of pressure from his father. His father (Rifkin) is a judge. To please his father he becomes a stockbroker. This happens upon a chance encounter when a wealthy bettor, Greg (Nicky Katt), comes into his casino and offers him a job under his tutelage to make real money. He takes it, thinking that it should satisfy his father’s demands for legitimacy; but, he still does not give up his profitable casino.

Seth goes to work days for this Long Island brokerage firm and quickly realizes he is again working at something that is dishonest. The firm sells bogus stocks in companies that may not even exist, by using high-pressure telephone tactics. He realizes that he had a better product and a more honest business in his casino where his customers, at least, had a chance of winning.

Why Seth stays at a corrupt firm is foisted onto his failed relationship with his father and his need to prove himself, instead of holding the kid himself responsible for making his own hell. The secondary story is about the family drama, the reactions of his disapproving father and this part of the film suffers from being cliché-ridden, as the kid desperately tries to win approval from his recalcitrant father.

The story’s other subplot is a frenetic tale of white men in their twenties with lots of testosterone to burn, who just want to be millionaires and don’t care how they do it. The dialogue is schmaltzy and unconvincing; their hard sell techniques are sleazy and leave the characters soulless, and the ‘homeboy’ attitudes displayed by their after-work hijinks leaves a lot to be desired.

The secondary subplot is saved somewhat by Ron Rifkin’s understated performance, that showed the conflict he was having in trying to love his son Seth. He has a constant pained facial expression, as the father-son relationship had an undue tension between them that made for some perplexing melodramatic moments.

But this is clearly a film about young people with unbridled energy who are clueless about how to live their lives without copying someone else’s idea of what the good life is. And, the film lags because these young ones are so dull-witted and deliver lines without the gift of gab that a writer like David Mamet scripts for his stars, in such films Glengarry Glen Ross. But through the device of quick paced editing, it appears to be moving to some sort of rapid resolution. Its moral theme might be if you get rich so fast, you must be ready to fall just as fast.

The characters are low-level white collar hustlers, the amoral garden variety kind, and their distasteful conduct and empty lives spark no interest. These are the kind of telemarketers that the American public has been inundated with over the recent years, with no end in sight. The best way to handle these fast-talking vultures, is just hang-up on them. Since the film doesn’t humanize them but allows them to be the monsters they really are, it is indeed a hard sell to find this film as anything but a look at the ugly side of outlaw capitalism.

This is the writing and directing debut of Ben Younger, a 29-year-old who seems to know a lot about how unscrupulous brokers operate and wants desperately to say something about his generation. He has told interviewers that he was turned down for a similar job by such scam operators because he couldn’t do the scams they asked him to do.

The movie has a lot of energy and zeroes in on an unhealthy segment of the population whose lure is solely for material things, not giving a hoot how ethical their job is. Its company name J.T. Marlin is a play on the legitimate name of J.P. Morgan, hoping to fool the suckers who will become their customers into believing they are of the same repute. The company promises to make trainees into millionaires within three years, if they follow their unethical methods. At least in Oliver Stone’s film the brokers started off innocent and turned corrupt. Here they start off corrupt and never for a second see anything wrong about being corrupt until it is too late, which makes it very difficult to care for anyone in this film. Even after the stiff portrayal of the heartless FBI agents who raid their firm, it is difficult to feel sorry for these greedy brokers; or, for that matter, for their greedy victims.

Jim Young (Ben Affleck) — the firm’s trainer of recruits, snarls at them, “We don’t hire brokers here–we train new ones.” He flaunts his wealth at them, his Ferrari, his mansion and, at 27, tells them he is considered an old-timer here, who had better prove his worth to the firm every day or else he’ll be out. The big boss is also in his twenties, Michael (Scott), who stays behind the scenes, running the firm as a complete scam. These young rip-off artists have no class, they do not even know how to spend their money wisely. In the background hip-hop music blares away.

This is a film geared for young people, its target audience is probably made up of those who liked last year’s overrated nihilistic Fight Club. It depicts Generation X, struggling to get ahead without knowing how to act in their attempt at being millionaires or what to do if they reach their Promised Land.

A romance is brought into the film as another subplot, but is never fully developed. The one black face in the firm is a receptionist, Abby (Nia), earning $80,000 a year. She shuns Greg and goes for his underling Seth, in a romance that has about as much spark in it as a firecracker that fizzles out in your hand. Why this interracial romance develops and how it suddenly ends, doesn’t amount to hill or beans. The one tear coming down Abby’s cheek when the romance ran into what was supposedly a roadblock, was about as fake as the stock deals offered to the Midwestern yokels her firm preys on.

The best thing about the film was the performance of Vin Diesel as Chris, a seasoned hustler of stocks and bitter rival of Greg’s. There is a certain power in his character, a believability about what he is doing there that seemed more intense than Seth’s fall and redemption. Diesel remains true to his character as a cynical, hard-nosed trader, who can bend if he has to. The film would have been better off focusing in on his story; it would have remained true to its cynical premise about the youth it features.

This story is at best about a theme that was done before in films such as “Wall Street” and the “Tin Men,” but this time with even more cynicism and more of an edge to it. The actual boiler room is the stock firm’s headquarters — a room crowded with desks, computers, phones and glib young white guys gloating when they cheat someone in their telephone deals. The picture itself is a hustle trying to sell you something by pretending it has something to say, if you hold onto to its premise without selling it short.

There are some underlying problems in the ‘boiler room’ relationships besides the usual ones of competitiveness. Greg, who like Seth is Jewish, tells the Italian-American Chris, “Why don’t you go back to Little Italy?” and Chris shoots back, “Why don’t you go make me a latke, dreidel boy?” Interestingly enough, the only one in the firm that Seth trusts is Chris, and this trust is rewarded in a contrived scene in the end, as the film tries to dig itself out of the amoral hole it dug for itself. The operative word in this film is: contrived. 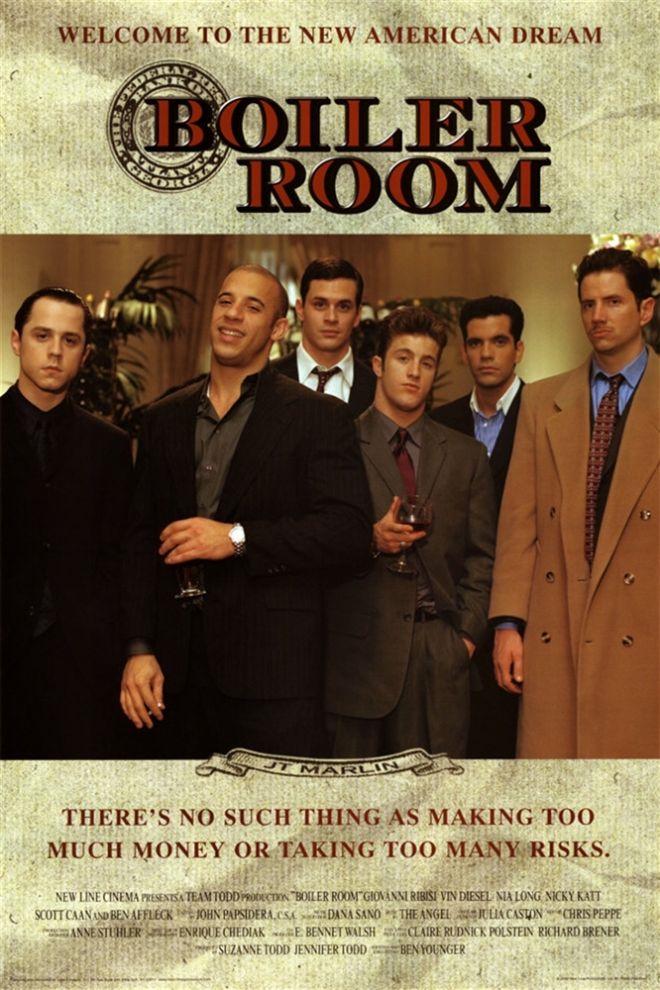