A dull boxing melodrama directed by John Sturges (“The Magnificent Yankee”/”Never So Few”/”Bad Day at Black Rock”) and written by Charles Schnee. It’s filmed in black-and-white.

Wheelchair-bound fight promoter Sean O’Malley (Lionel Barrymore) because of failing health obeys doctor’s orders to rest and has his feisty daughter Pat (June Allyson, real-life wife of Dick Powell) take over the business while he’s incapacitated. The only money-making prospect in his struggling stable is Mexican-American fighter Johnny Monterez (Ricardo Montalban), who is Pat’s lover. Big-time rival promoter Allan Goff (Barry Kelley) is aggressively trying to get Johnny to break his contract and sign with him. This has Pat go to Johnny’s training camp, some 25 miles from the city, to deflect her rival. During a sparring session Johnny injures his hand and is told by his doctor (Frank Ferguson) it’s only a bruise. Johnny then learns that though he’s cleared to fight, he has suffered permanent bone damage as a result of previous fights and his career could end at any moment. The doctor agrees to keep this medical report secret. Johnny then signs a lucrative contract with Goff, as he gets a guaranteed income upon retirement. I guess the big-time promoter couldn’t afford to get a doctor to give his new fighter a physical.

Also at the training camp is the well-educated heavy drinking sports writer Rick Gavery (Dick Powell), who nurses a secret crush on Pat but feels he can’t compete with the famous fighter. Things get tense when the troubled fighter pushes his writer friend away from him, as he goes on a rant about gringos keeping Mexicans down. When Sean learns of the betrayal by Johnny, he dies of a broken heart. An irate Pat accuses Johnny of killing her dad. Then Johnny’s twisted thinking has him purposely losing his title fight and thereby quitting boxing, even though there’s no more damage to his hand. An overwrought soppy climax has the three warring parties become reconciled.

When compared with the previous year’s boxing pic, The Set-Up, this one pales considerably. What’s interesting, though, is there’s a provocative inter-racial theme where none of the featured whites are bigots. In the end, the insecure dark skinned immigrant, with a chip on his shoulder, wins the unprejudiced white skinned American sweetheart. That must have been something different for its 1950’s audience to take in. Too bad the pic didn’t have enough fight in its melodramatics to go the distance and win a decision on points, as its right cross looked suspect. 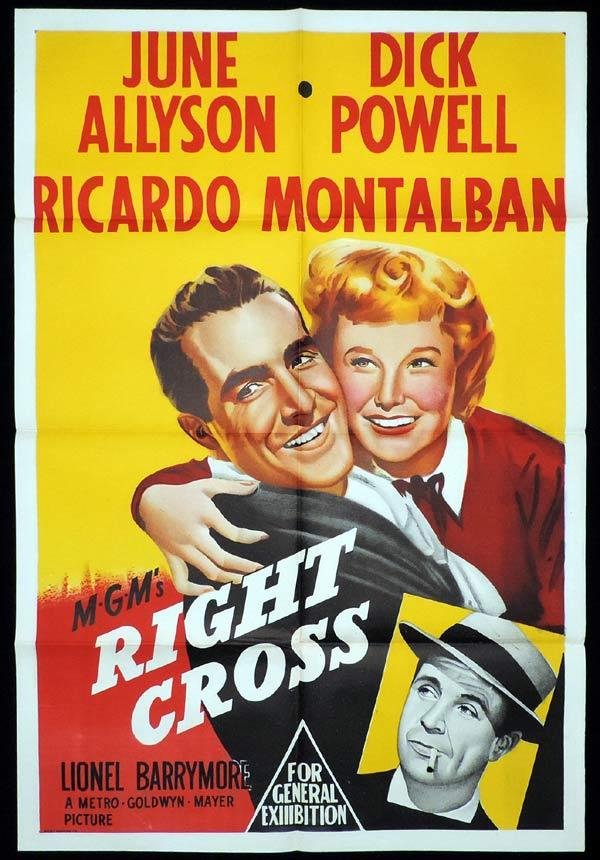