“A rousing adventure story where the actors seemed in their element with all the hokum.”

Veteran studio crowd-pleasing director Henry King (“The Gunfighter”/”A Yank in the RAF”) helms a fine costumed swashbuckler that combines romance with a rousing adventure story where the actors seemed in their element with all the hokum. It is boldly filmed in 3 strip Technicolor, and is loosely based on the book by Rafael Sabatini. The spirited screenplay is by Ben Hecht and Seton Miller. It is excitingly staged and features a superbly gifted cast. The Black Swan is a classic of its genre. Though in spots it tends to flag and is laden with clichés, which the actors fight off with the vigor of their performances. Cinematographer Leon Shamroy won an Oscar for his colorful photography featuring gorgeous sunsets on the high seas. Its popularity when first released was as an escapist film, just what the WW11 audience was looking for.

It is the seventeenth century and a treaty has just been signed between warring England and Spain. That allows for the notorious English pirate Henry Morgan (Laird Cregar) to be pardoned instead of hanged by the English king, and to boot he’s given a title and called Sir Henry and made governor of Jamaica. He then enlists the help of some of his plundering former pirate partners in ridding the Caribbean of buccaneers. One of them is the roguish buccaneer Jamie Waring (Tyrone Power), who lives only for sacking the Spanish vessels and the coastal territories along the Caribbean. Also joining Morgan is Tommy Blue (Thomas Mitchell), an old pirate with larceny in his heart but fiercely loyal to both Morgan and Jaimie. But a problem arises when the cutthroat pirate dressed in a thick red wig and beard, Captain Leech (George Sanders), and his first mate (Anthony Quinn), refuse to go along with the orders to reform, and instead they loot a ship filled with gold when supplied with info by the effete spy Roger Ingram (Edward Ashley). Roger is a snooty lord who wants Morgan impeached, with the dual motives for his foul deeds being greed and political intrigue. He’s engaged to former Jamaica Governor Denby’s (Zucco) pretty daughter Margaret (Maureen O’Hara). Jamie has also fallen for the lovely lady of wealth and privilege, who spurns his persistent advances in a feisty manner–but to no avail.

It builds to the finale swashbuckling ship battle scene, with Jaime ordered by Morgan to bring down Leech and bring back law and order to the Caribbean. But Jaime is so taken by Margaret and upset that she plans to leave the next day with Roger to England to marry him, that he kidnaps her and holds her in bondage. On the high seas he’s met unexpectedly by Leech and to save his hide from Leech’s more powerful vessel the Black Swan, he pretends that he has come to join him and that he brought along his wife Margaret. The pirates head to Maracaibo to loot some more gold, but Morgan and his men are there to bring on the heroic fight for justice. 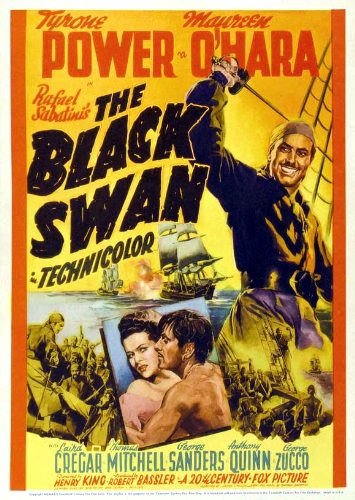