“Does the trick of providing thrills.”

This is John Wayne’s second feature for Warner Brothers. It’s a remake of Ken Maynard’s silent Land Beyond the Law (1927). It’s directed by Tenny Wright and is based on the story by Marion Jackson; Kurt Kempler provides the script.

The governor of the New Mexico Territory (Berton Churchill), located in Santa Fe, sends Deputy Sheriff John Steele (John Wayne) to protect newly arriving settlers. The Gov sends a letter to cattle baron Sam Crew (Noah Beery) telling him to expect a deputy and to offer him any assistance, evidently unaware that Crew is the head of a gang of rustlers. Steele soon befriends settler Ginger Malloy when he stops Crew’s henchman Arizona (Paul Hurst) from punching out her bratty little brother Pat, after the tyke tried to rope him while he was catching a snooze on the street.

The action picks up when Arizona is caught snooping on the settler’s herd by wagonmaster Cal Brett (Lafe McKee) and fatally plugs Ginger’s uncle. Steele realizes that he needs help, so enlists help from Mexican bandit Sonora Joe (Luis Alberni), a rival of Crew’s. Sonora helps the deputy capture Arizona and brings him to nearby Fort Cummings to await trial. Sonora then helps in the climactic scene when Crew attempts to rustle the settler’s 5,000 head herd when he hears that the army agreed to buy beef from them. It results in a big stampede (footage from the silent version) as the settlers are taking their herd to Major Parker at Fort Cummings. The scowling villain Crew gets his comeuppance as Sonora wounds him and he gets trampled to death by the herd he stampeded. Steele also wins the love of Ginger. As for comic relief, Sonora stops Pat from using his slingshot as sis is kissing the deputy.

The Big Stampede does the trick of providing thrills, and offers the suggestion that sometimes the law has to be clever and get help from sources it usually won’t in order to get rid of a bigger menace. 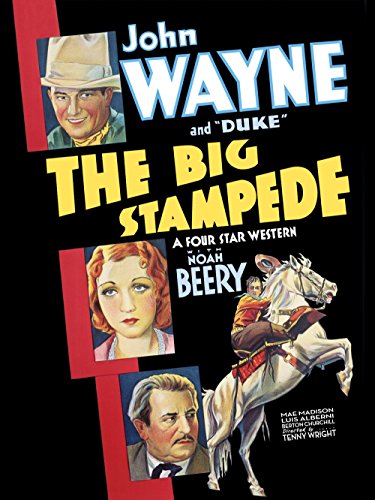