“This is not one of Hawks’ great films, but it’s one of his most visually satisfying.”

Howard Hawks (“Red River”/”Rio Bravo”) directs an ambitious adventure film based on the lengthy A.B. Guthrie Jr. novel “The Big Sky.” There are two versions–the original 140-minute version I saw, and the edited one trimmed down to 122-minutes. The black and white film is sumptuously filmed on location in the Grand Teton National Park and in Jackson Hole, Wyoming.

The film is set in 1832. Jim Deakins (Kirk Douglas) is a Kentucky farmer who hooks up with mountain man drifter Boone Caudell (Dewey Martin) and abandons the farm for a life of adventure. The two rowdy pals make their way by mule to see Boone’s ornery grizzled trapper uncle Zeb Calloway (Arthur Hunnicutt) in St. Louis. After looking with no results all over the booming city of 12,000 population, they end up in jail over a barroom brawl and locate Zeb in jail. The three are bailed out by river boat captain ‘Frenchy’ Jourdonnais (Steven Geray), who needs Zeb to join a pioneering fur trading expedition 2,000 miles up the unexplored part of the Missouri River–a place no white man has seen. Zeb lived among the Blackfeet and speaks their language, while Frenchy is also bringing back to the chief his beautiful daughter Teal Eye (Elizabeth Threatt). Along the way the pioneers ward off attacks from Crow and Sioux, they must fight off the fur company that wants a monopoly of the fur trade and allows no freelancers to operate on their turf, Deakins has his finger amputated the old-fashioned way, a white trader named Streak betrays them to the Crow and when discovered is given a taste of frontier justice, and Deakins and Boone save Teal Eye when she goes in the river and is battling to stay afloat in the rapids.

The pioneers reach the Blackfeet camp and make a profitable trade, but Hawks seems to be more interested in the love story that develops in the triangular relationship. Teal Eye’s heart goes out to Deakins as a brother and to the Indian hating Boone (he was told a lie that his older brother was killed by Indians) as a lover. In the end this is a coming-of-age film, as the journey has the young man mature and with that his friendship with Deakins is no longer the same.

This is not one of Hawks’ great films, but it’s one of his most visually satisfying. Unfortunately the middle part of the adventure tale sags as it rambles on without direction and the exciting conclusion comes on too fast for the viewer to absorb the full impact of Hawks’ vision. 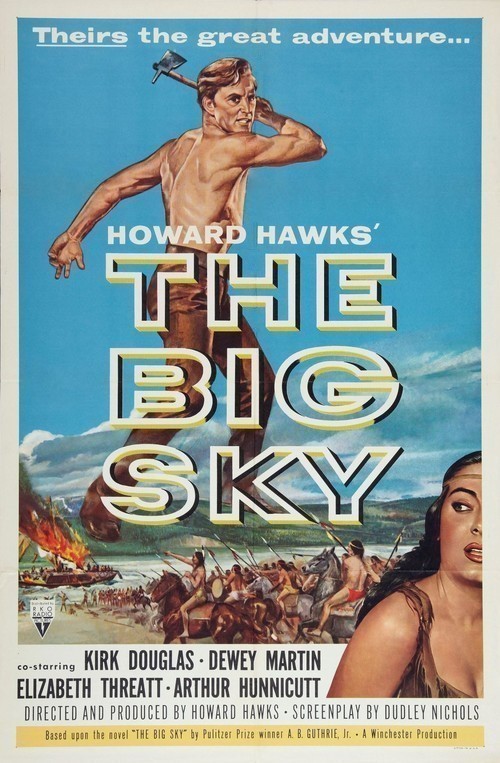 A WALK IN THE SUN