“Cliched New York type of creepy/funny film that might only appeal to the male sports fan.”

Robert Siegel (“The Wrestler” screenwriter) in his directing debut also writes this comical but bleak story of an obsessed manchild that has a sports twist about hero worship gone astray. It has an ideally cast stand-up comedian Patton Oswalt playing the anti-social Paul Aufiero. He’s the 35-year-old grubby, rotund, bachelor nerd Staten Island resident living at home with his nagging mom (Marcia Jean Kurtz) and working as a parking lot attendant in a dinghy S.I. garage. Paul is a die-hard NY Giant football fan who (yikes!) sleeps under a poster of his favorite football star, the fictional Giant linebacker Quantrell Bishop (Jonathan Hamm), and is a devout follower of those 24-hour a day talk radio sports shows. At night he’s a regular caller, Paul from Staten Island, and trash talks the opposition and champions his team as their No. 1 fan. The animated talk show calls are the highlight of his dreary life, and he’s good for ratings as he becomes a star of the show. His best chum and biggest admirer is the grungy Sal (Kevin Corrigan), another loser who lives alone in an apartment. The two visit the Meadowlands for every Giants home game but, since the tickets are out of their price range, they watch the games on a TV from the large stadium parking lot.

By chance, one night, Paul while at a S. I. pizza parlor spots Bishop and follows in his car the bling-attired athlete in his fancy SUV to a drug buy on S.I. and then to a Manhattan strip-club, and watches Bishop and his posse gather around them a bevy of pole dancers. In the club Paul introduces himself as a fan of Bishop’s and then rubs the jock the wrong way by telling him that he followed him from Staten Island. Paul is given a beat-down for possibly trying to shake down the athlete for buying drugs, and as a result is hospitalized. So much for hero worship, you would think! The Giants when they find out about the incident, suspend Bishop. But Paul refuses to press charges or sue, until Paul’s successful ambulance-chasing lawyer brother Jeff (Gino Cafarelli) files a multimillion dollar lawsuit against the player despite his brother’s opposition. All Paul can think is that his Giants without Bishop in the lineup might lose the division to the rival Philadelphia Eagles.

From hereon the character study of the social misfit gets weirder but not necessarily better, as the Big Fan is an unsentimental but cliched New York type of creepy/funny film that might only appeal to the male sports fan. If you don’t think Paul is an authentic character, just check out WFAN in NYC–an all-sports AM radio talk show–and you’ll find there are many New Yawk types like Paul out there who totally identify with a team that doesn’t pay them. Some go over-the-top and these fanatics or fans, if you will, are very much like Paul–living vicariously through someone else. 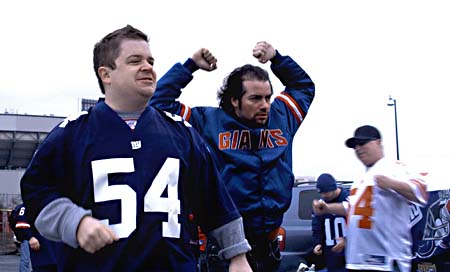 A BRIDGE TOO FAR