A conventional biopic about Bronx-born singer/actor Bobby Darin, and his meteoric climb to success and his compelling need to become a showbiz legend. The film veers back and forth between his childhood and adult life–as a plot device is used having Darin as a precocious child (William Ullrich) look back at his life with Darin as an adult and engage him in conversations. Kevin Spacey is director and miscast star, as he’s too old (at 45) for the part. Despite some good musical moments (especially that fantasy number of singing the pic’s title song, taken from one of Darin’s biggest hits), the “Mack the Knife” singer’s story never catches fire. Spacey admirably does his own singing, doing a fair job getting close to Darin’s voice.

Born in 1936 as Bobby Cassotto, his name was later changed for showbiz reasons. Darin never knew his father; he was raised by his musical loving mother Polly, his much older sister Nina (Caroline Aaron) and her garbageman husband Charlie Maffia (Bob Hoskins). Bobby caught mom’s passion for music at an early age. Later in life, after his beloved mom died, he will find out that his sister Nina (Caroline Aaron) is really his mother.

At seven, Bobby learns he has a weak heart due to rheumatic fever and the doctors tell him he’ll never live past 15. Bobby defies them and lives until he’s 37. Bobby after attending Science High School and Hunter college tries desperately to break into showbiz, hiring the following: novice manager Steve Blauner (John Goodman), loyal brother-in-law Charlie as valet, as music director Dick Behrke (Peter Cincotti) and the inexperienced David Gershenson as his publicist. Pressed by his record company to come up with a hit record, he writes in a few minutes Splish Splash and appears on American Bandstand becoming an instant teen idol. Restless to be more than a teen idol, he records Mack the Knife in 1960 and wins a Grammy Award. Trying his hand at acting, he ventures to Italy to appear with Rock Hudson and Sandra Dee (Kate Bosworth) in the frothy comedy Come September. Bobby falls madly in love with the cutesy airhead Dee and marries her despite the objections of her overbearing stage mother Mary (Greta Scacchi). In 1964, he gets nominated for a supporting Best Actor Award for his role as a shell-shocked soldier in Captain Newman, MD.

The ambitious Darin reinvents himself as a Las Vegas nightclub vocalist in imitation of Frank Sinatra. With the protests about the Viet Nam War and the Civil Rights movement growing, Darin soon changes his image again and tries singing as a protest rock singer á la Bob Dylan. This fails to attract new fans and turns off his regular fan base, leaving him without a hit record for a long time. Also, his marriage falls apart in a divorce, as the so-called ‘perfect couple’ grows apart physically and mentally.

Though energetic and getting the details right, the film disappoints as it never gets past all its weaknesses. The main obstacle is that Spacey is not up to being Darin despite his enthusiasm for the role, and then there’s the awkward love affair Spacey has with himself playing Darin–which left me thinking if Spacey will ever get off his current losing streak in films and make another winner. 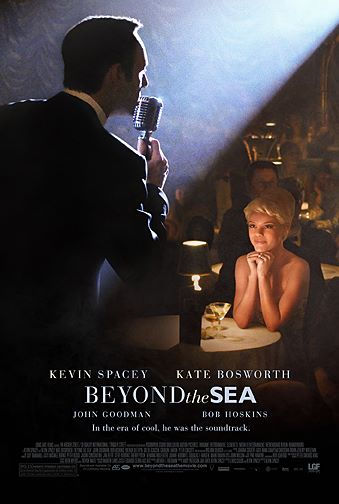