“One exciting climactic fight scene in a river between Wayne and Yakima Canutt. Otherwise a forgettable minor Western.”

Routine Western directed by Harry Fraser from the story Gun Glory by Burl Tuttle, who also handles the screenplay. John Wayne plays Chris Morrell, who is a guardian to a little Indian girl Nina (Shirley Jean Rickert). Her Indian mother died at childbirth and her good-for-nothing white father Tom (Earl Dwire) deserted before the child was born. Chris is looking for Nina’s dad to get his signature as required by the Department of Interior, as the girl has inherited some oil-rich land worth $50,000. But Sam Black (Yakima Canutt) and his gang try to snatch her. Chris holds the gang off on the trail and sends Nina alone to Bud Moore’s ranch at Snake River. When Nina gets there, she learns Bud died in a range war a year ago and the place is now owned by meanie Vic Byrd (Jack Rockwell). Cowhand Matt Downing (George ‘Gabby’ Hayes) treats the frightened girl kindly, after her bad experience with the surly Byrd. Meanwhile Chris holds Black’s gang off and escapes when he stampedes their horses, only to fall unconscious along the trail. Jim Moore robs the express office of $6,000 in Snake River and escapes. He finds Chris lying unconscious and switches clothes. Jim’s sweet sister Clara (Sheila Terry) returns on the same trail from town and finds Chris, and believes he’s not the holdup man when he tells her he’s best friends with Bud Moore. She tells him about Bud’s death and they go to her ranch home, where he changes clothes again. When her brother Jim comes over, Chris doesn’t tell that her brother was the express office robber. When asked what he thinks of her brother he says “Some men are like books written in a strange language, and that makes it awfully hard to read them.”

Vic Byrd learns of the girl’s value to Sam Black, and along with Jim returns Black’s horses he found on the trail. He then cuts a deal with Black to turn the girl over to him for a half share. Vic then gets Jim to tell him where he stashed the express office money so they can split it and when they get there, Vic kills Jim. Chris and and Matt find Jim and before he dies he tells about the plot to snatch Nina. Meanwhile Tom, who is also a cowhand on Byrd’s ranch, learned from Matt that Nina is his daughter and becomes paternal. When the outlaws come to snatch Nina he protects her until Chris returns.

There’s one exciting climactic fight scene in a river between Wayne and Yakima Canutt. Otherwise a forgettable minor Western. 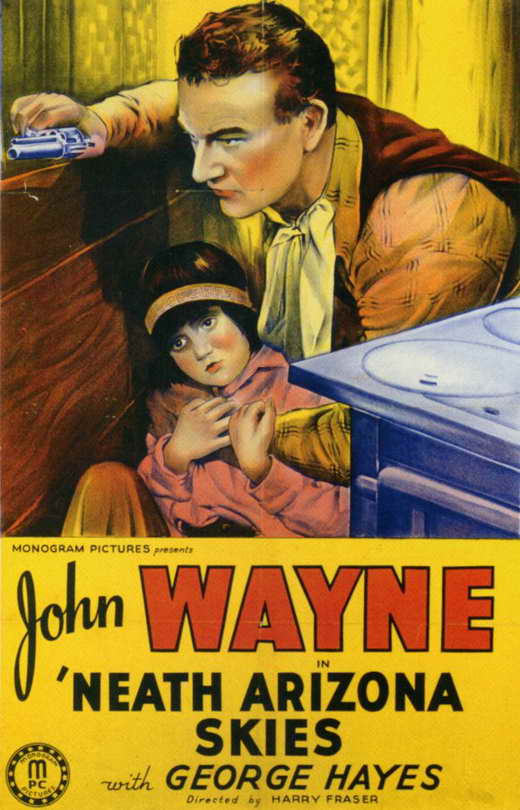