A turgid but competent remake of Outward Bound (1930), which was based on the 1924 play by Sutton Vane and was updated for World War II. It’s finely directed by Edward A Blatt (“Now, Voyager”/”This is the Army”/”They Died With Their Boots On”) and written by Daniel Fuchs.

Psychologically damaged Viennese pianist Henry (Paul Henreid), a volunteer fighter for the Free French Forces, is denied passage to a ship bound for the states at a London port because he lacks an exit visa. Out on the street, after an air raid, a bomb strikes a taxi and kills everyone. Meanwhile Henry’s wife Ann (Eleanor Parker) fails to rescue him from committing suicide by turning on the gas and joins him in death. They find themselves next on the same ship with those killed in the taxi bomb blast, expecting to go to either heaven or hell. They are serviced by the steward (Edmund Gwenn).

The bleak film demands a lot of viewer patience. But fine performances by John Garfield, as the over-reaching broken down newspaperman, Sydney Greenstreet, as the divisive reverend examiner, Henreid, as the sympathetic desperate man, and Gwenn, as the lovable ship steward, keep things alive more or less. 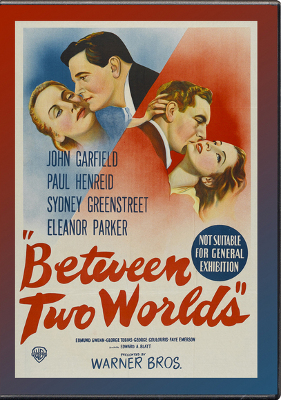