“It’s a fun film and a fitting swan song for the legendary filmmaker who made his mark in both Germany and America.”

Austrian-born Fritz Lang (“M”/”Metropolis”/”Human Desire”) returns to Germany to make his last film, where he began his film career as a twentysomething and remained until his exile to America in 1933–precipitated because of his fear the Nazis would discover that his mother was Jewish. The 1,000 Eyes of Dr. Mabuse is a stunning update (now set in postwar Germany) to his famous master criminal series that has Dr. Mabuse, a master of disguises, who cannot die (his spirit lives on forever), as the madman plotting to rule the world. It’s a fun film and a fitting swan song for the legendary filmmaker who made his mark in both Germany and America. There were five sequels made to this new Mabuse characterization, but Lang would refuse to direct any of them.

In this fantasy crime thriller, Lang gets a chance to express his usual anti-Nazi sentiments and fatalism. He imaginatively depicts a world populated by nuclear terrorists, criminals, psychopaths, and doomed lovers. Wolfgang Preiss is the new version of the evil Mabuse, as he disguises himself as a mysterious blind seer helping the police solve crimes that he actually committed (Professor Peter Cornelius) and as an outwardly kind psychiatrist (Dr. Jordan), running a sanitarium, who hides his ugly side. It’s a film where nothing is what it seems.

The techie set pieces that would do the James Bond series proud, have a ‘long steel needle’ as a bullet fired into the victim’s head that makes the murders hard to detect, exploding telephones, two way mirrors, a club-footed monster, and a car with revolving license plates used in a chase sequence.

The film is set almost entirely in the luxurious Hotel Luxor, where every room has a television camera that is monitored by a TV controlled by Mabuse and his gang (the hotel is based on the Hotel Adlon in Berlin, which the Nazis rigged with modern surveillance equipment to spy on guests). Mabuse’s henchmen never see him, as they receive their instructions by radio transmission.

The film opens with the murder of a television reporter Peter Barter as he is driving to work and the blind seer Cornelius reporting just beforehand that he has visualized the murder to the police commissioner (Gert Frobe). The commissioner noted that Barter was killed because he discovered something fishy at the Hotel Luxor and therefore puts the hotel under observation since many strange incidents have taken place there recently (the police snoop in the same sinister way the criminals do). The commissioner notes there’s even a police agent operating there in secret to everyone, including him.

American multi-millionaire Henry B. Travers (Peter van Eyck), the owner of a nuclear arms plant, while staying at the Luxor to ink a new contract for rockets, saves the life of the suicidal hotel guest Marion Menil (Dawn Addams), who is about to jump from the ledge, and promptly falls in love with her. Why the married woman wanted to commit suicide leads to a bizarre tale involving hypnosis and many complex plot twists. Insurance agent Mistelzweig is suspected by the commissioner of being a fraud, and is closely watched by the police along with the blind mind reader and the suicidal woman. The film veers from being a serial action episode to a social commentary film, and both aspects are handled especially well.

It’s interesting to note that The 1,000 Eyes of Dr. Mabuse was never released nationwide in the United States (only a limited run in dubbed English). The new DVD is in English subtitles from the original German-language version. I saw the dubbed version, which didn’t do justice to the performers. 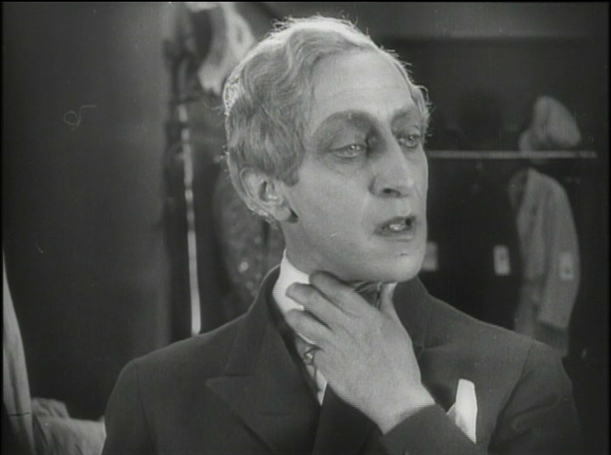