A risible standard action/adventure flick that can be blamed for its failure on the rotten script by Endre Bohem and Louis Vittes rather than on the talented director John Brahm(“The Locket”/”The Lodger”/”Hot Rods to Hell”). The director tries to make a go of it with his usual stylish touches. It was filmed on location in Arizona’s Yuma Desert. It’s based on the story by Jeff Bailey, and looms as a tale of unethical characters searching for stolen gold in the desert of North Africa.

In postwar Bengazi, American expatriate army deserter Gillmore (Richard Conte) and the lovable but untrustworthy rogue Irishman Donovan (Victor McLaglen), are co-owners of a dumpy local cafe. Gillmore’s ex-con pal Selby (Richard Erdman) tells of Arab gold hidden by the Nazis in a desert mosque and the two go after it. But the nosy Donovan gets wind of this and the trio search together for the gold in a stolen jeep. The heavy Scottish accented Brit police inspector Levering (Richard Carlson) tries to recover the stolen vehicle and brings with him Donovan’s attractive but guileless convent educated daughter Aileen (Maya Powers). At the gold site they are all surrounded by hostile Bedouins. The damsel in distress attracts both Gillmore and the police inspector, as they show off for Aileen by acting heroic.

If you’ve seen The Lost Patrol (1934), you know where the plot line is going. 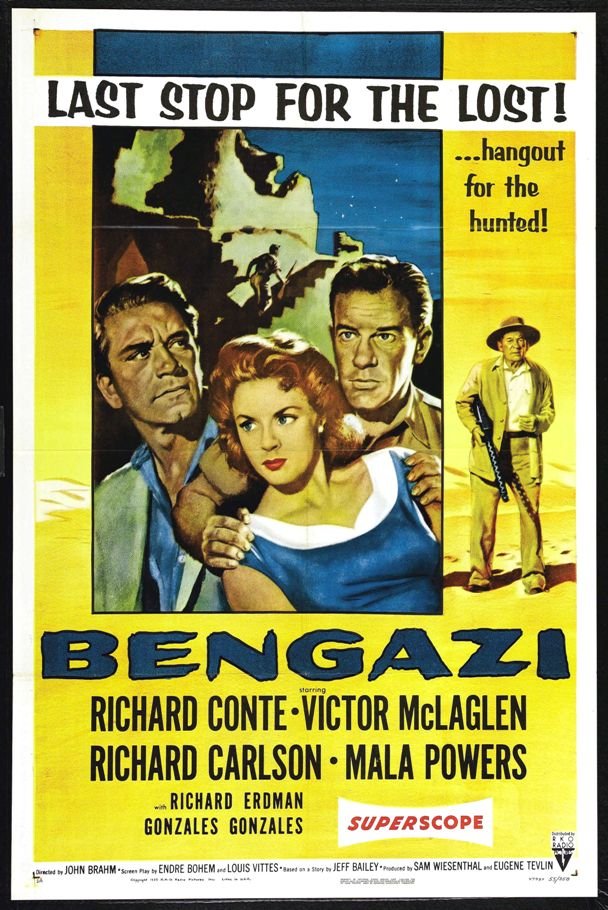 13 CONVERSATIONS ABOUT ONE THING