BENEATH THE PLANET OF THE APES

“Social commentary was not one of this glum film’s strong points.”

Heston only signed on to do the opening and closing segments and his replacement, James Franciscus, gives a wooden performance as an inadequate replacement. Director Ted Post (“Nightkill”/”The Human Shield”/”Magnum Force”) does a half-assed job (though in fairness to him, the studio didn’t help by cutting the budget in half from the original and interfering with unnecessary script changes). Also the execution is lackluster (except for setting the proper dark mood) and the dialogue is laughably Ed Wood bad.

It picks up where the original left off, as the US astronaut Taylor (Charlton Heston) has discovered the ape planet and that he was now in the post-nuclear Earth, some 2000 years in the future. Taylor soon vanishes while exploring on horseback the Forbidden Zone with his silent mate Nova (Linda Harrison, would later marry executive producer Darryl F. Zanuck).

Warning: spoilers in this paragraph.

Taylor lookalike Brent (James Franciscus), another US astronaut, sent with an expedition to bring back Taylor, has crash-landed and when his skipper (Tod Andrews) dies he’s the remaining survivor. Brent’s then taken to the ape city by the bikini-clad mute horseback riding Nova, who is wearing Taylor’s dog tags. Once in the ape city, Brent’s hidden by the friendly to humans chimp scientists Zira (Kim Hunter) and Cornelius (David Watson). Before you can peel a banana, Brent and Nova are captured by a hateful gorilla named Ursus (James Gregory) and brought to the underground of the Forbidden Zone–the ruins of New York City. Ursus is a baddie military leader who wants to lead his knucklehead flock on a jihad. But the prisoners escape with Zira’s help, only to be captured again. Their captors are a group of human mutants with telepathic powers who worship the atom bomb in St. Patrick’s Cathedral. In order to allow both prisoners, Taylor and Brent, to escape, the noble savage Nova interferes with the guard’s telepathy even though it puts her life at risk. The prisoners flee to the church where the mutant society worships the gleaming nuclear missile, that Taylor recognizes as a doomsday bomb. Meanwhile the gorillas have invaded the mutants’ space and either are shooting or enslaving them. Poor Nova gets it here, as one of the gorilla soldiers plugs her. The climax will lead to the prisoners’ date with their fate, as the gorillas also kill Brent and in retaliation the Earth is destroyed by the nuclear device detonated by a mortally wounded pissed off Taylor. There’s nothing much that can be said about that, as social commentary was not one of this glum film’s strong points.

John Chambers’s special ape makeup design deserves kudos, as does the musical score by Leonard Rosenman. Of note, it was the only film in the series with no Roddy McDowall (his part was played by David Watson). 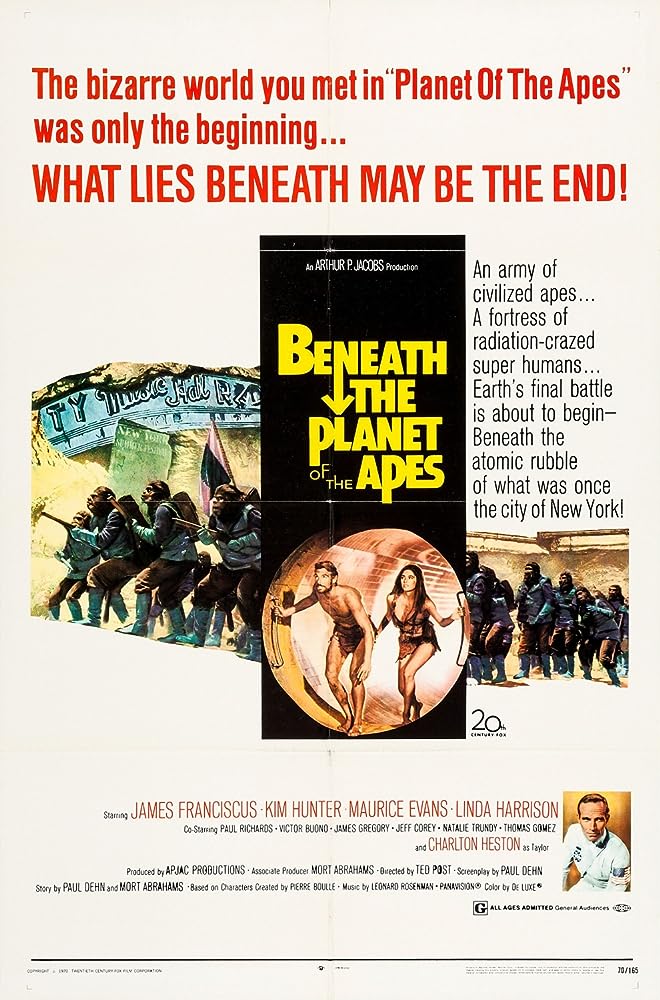