BE HERE TO LOVE ME: A FILM ABOUT TOWNES VAN ZANDT

Margaret Brown’s loving but unflinching documentary on celebrated singer and songwriter Townes Van Zandt is the first one on the soulful but troubled musician. It’s a traditional straightforward documentary that chronicles the Texas born musician’s life from his silver-spoon childhood to his later success as folk icon to his mental and alcoholism problems. Living an edgy adult life that balanced his love of music with his substance abuse problems, Van Zandt died at the young age of 52, in 1997, from a heart attack. For those who never heard of him, this is a good chance for an introduction to the soft-spoken lanky fun-loving songster with the rich Texas drawl. He’s written such wonderful folk songs as “Pancho & Lefty,” about a drifter and an outlaw in the Old West, with lyrics that tell how the bandit wears his “skin like iron” and his “breath’s as hard as kerosene.” Willie Nelson and Merle Haggard turned it into a No. 1 country hit in 1983.

With a lifetime history of self-destructive behavior, we follow Van Zandt’s questionable actions in an Illinois boarding school where he played football and was in the ROTC, and where in his yearbook photo he was jokingly shown with a sock in his mouth after sniffing airplane glue. The adult Van Zandt went on to do such crazy stunts as jump off a fourth-floor terrace “to see how it felt.” The scion of a Texas pioneering family (his father was a wealthy Fort Worth oil executive) not only struggled with inner demons but with a severe alcohol problem, and that deadly combo led to his being treated for insanity in a mental hospital with electric shock treatment after the jumping incident. His friends say he never quite recovered from that ill-advised treatment.

It’s hard not to like the low-key charming folk singer of sad and hopeless songs as both a person and a musician, who says on film “I’d like to write songs that are so good nobody understands them, including me.” Brown doesn’t judge the man who married three times and sired three kids but she lets the camera roll and we take it all in, as he offers self-deprecating comments about his life and there are further interviews with family, friends and fellow musicians that offer telling anecdotes about his life. By the end, we know a little more about the man behind those sensitive and riveting songs who never reached a wide audience but was known in the trade as a “songwriter’s songwriter,” as noted by Kris Kristofferson. Some like acclaimed songwriter Steve Earle said Van Zandt is the best songwriter in the whole world, and that includes Bob Dylan. I won’t go that far, but I always liked his music and feel fortunate I got to see his life portrayed in this very fair and moving way. 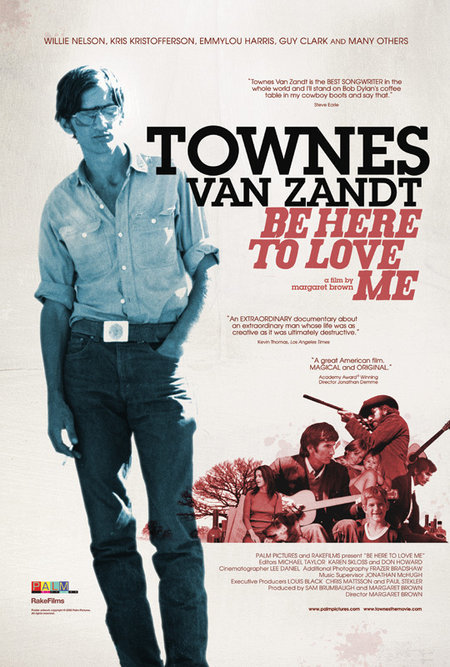