An uplifting screwball comedy that is along the lines of The Thin Man and Arsenic and Old Lace, but is not of the same caliber. It could have been much better than it was if the miscast stars Farley Granger and Shelley Winters were replaced by performers who knew how to do physical comedy. However the supporting cast consisting of such reliable character actors as Elisha Cook Jr., Sheldon Leonard, William Demarest, Francis L. Sullivan, Lon Chaney Jr, Hans Conried and Marvin Kaplan proved themselves to be much funnier than the leads. George Beck directs and pens the screenplay from a story he co-wrote with Frank Tarloff.

A Welsh terrier trained as a go-between for two underworld gangs gets free of Albert Jonas (Elisha Cook Jr.), a gangster involved in a smuggling operation, and the dog attaches himself in the street to Bill Denny (Farley Granger), who enters a gift shop to buy his wife Kate (Shelley Winters) a nightgown as a second anniversary present and doesn’t notice the dog followed him into the store. When the dog knocks over a showcase and Bill has to pay for the damages and now has no money to purchase the gift, he comes home empty-handed trying to think up an excuse. But the dog followed him home and his wife is very happy when she discovers the pup and takes it as a present, and Bill goes along with the deception. Kate calls the frisky pup Archie, and is not disturbed that the pooch wants to remain in their bedroom. Bill, on the other hand, wants to get rid of the pooch as soon as possible and sees his chance when he answers the ad in the paper for the missing dog. Bill secretly goes to the apartment of Albert Jonas but doesn’t realize he’s actually talking to Gillie the Blade (Hans Conried), a rival gang member, who just bumped off Jonas. Later when Jonas is found dead and Denny’s business card is in the dead man’s hand, the police bring Denny in for questioning and the fun starts in earnest.

The plot gets involved with the intricacies of the three smuggling gangs, one headed by Shortwave Bert and Max the Umbrella, while gang number two is made up of Gillie the Blade and Fat Freddy, and the third gang consists of Pete the Pusher, Jonas, and Pinky. Gang number three is trying to locate gang number one to buy some undisclosed merchandise. They are trying to close the deal with the help of the dog, who is the only one who knows how to bring the buyer and seller together. Dead bodies begin showing up wherever the bumbling Bill appears, in his seemingly futile effort to get rid of the dog. The nutty police under Inspector O’Ryan (William Demarest) can’t imagine what the dog has to do with the murders, while Bill is too bugged to make sense of it as he keeps yapping about how he doesn’t want his wife to know he didn’t get her a gift on their anniversary–which seems more important to him than the murders. There are also an endless stream of tired mother-in-law jokes, as the not-too-swift marrieds live in the house of Bill’s bitchy mother-in-law (Margalo Gillmore). 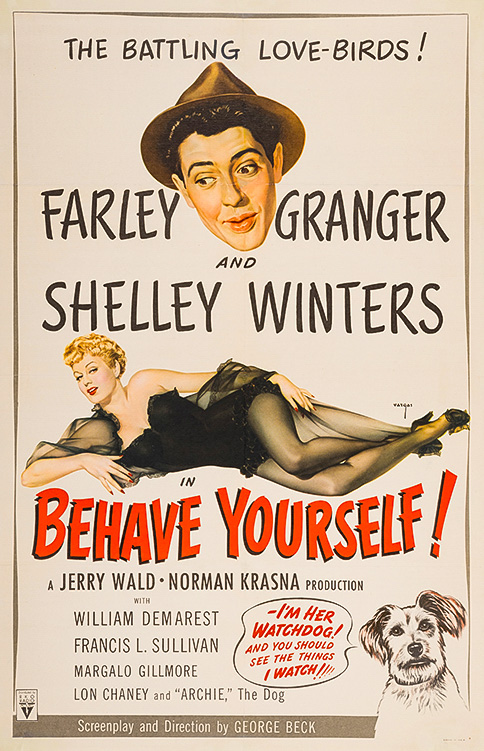