“This failed effort would have been better served if it wasn’t released.”

Beat is based on true story about the notorious literary giant William Burroughs, but is fictionalized in parts and feels as if there’s more missing than what was captured. The story never moves one closer to understanding Burroughs or what was his mindset when he drunkenly shot his wife to death while playing a game of William Tell. The only one cast right for this downbeat, moody docudrama set back in the days of the “Beat Generation, ” between 1944 and 1951, was Courtney Love as Joan Vollmer–the hapless bookwormish and alcoholic wife of William Burroughs. Kiefer Sutherland’s psychic vampire William Burroughs, never seemed confident of who he was and got bogged down with voice inflection problems from time to time — he would oddly go into character with the voice of either Jack Nicholson or W.C. Fields. Sutherland’s Burroughs made for a dullish bisexual genius writer, who never concerned himself with writing (at least in this film version) and never convinced he was battling inner demons. Burroughs just seemed like an unhappy queer who couldn’t find peace at home or with his young paid for toy boyfriend Lee (Trammell). Ron Livingston was beat poet Allen Ginsberg, the film’s narrator and only good guy amongst such rabble. He was dressed in the right heavy black framed nerdy glasses and seemed like the only caring member of the hipster group, but he was given a zero personality and made to appear too docile and understated. This tame characterization of Ginsberg is in contrast to his high-energy persona and the way he really was, at least the way he was later on in life. But the Oscar winner for being the most miscast, must go hands down to Norman Reedus as Lucien Carr. He’s the slightly arrogant and slightly humble son of a wealthy St. Louis family, who served two years in prison for stabbing to death his friend Dave because he made homosexual advances to him and wouldn’t stop. He’s a forgotten minor character from the beatnik days, who was the lightening rod who brought Burroughs and Joan together in NYC as well as inspire Jack Kerouac to type “On the Road” on a roll of teletype paper. He was first interested in Joan when they met in 1944, and is still interested in her seven years later even though she’s now married and has children.

The film opens in 1944 in NYC where Joan is a student at Columbia, and is living the druggie bohemian lifestyle. She will marry William Burroughs despite knowing he prefers men to women. The film quickly moves to 1951 and Joan and hubby are living in the rundown section of Mexico City with their two youngsters, Billy Jr. and Julie. After being abandoned by hubby William Burroughs, who has gone off to Guatemala to vacation with his paid for young boyfriend Lee, Joan is soon visited by Ginsberg and Lucien, who just got released from prison and has secured a job in NYC as a foreign correspondent with UPI. The young Ginsberg has come to terms with his homosexuality and has a crush on Lucien, which is never acted on. The men, who wrote Burroughs they were coming and feel hurt by his snub, talk the bored gin drinking housewife into taking a vacation with them to the erupting volcano Paricutin, as she irresponsibly leaves her youngsters alone to take care of themselves. Tension mounts as Lucien attempts to romance Joan, and when they return from their vacation both try and talk the loyal-to-her-hubby but despondent Joan to drive back with them to civilization in NYC. Burroughs — who comes from a wealthy family and receives only a small allowance from the family to provide him just enough to survive without working — can’t go back to the States because there’s a charge of heroin possession waiting there for him.

Unfortunately, Joan stayed with her children in Mexico and her fate was sealed in doom when her hubby returned from his sexual tryst in a foul mood because his young lover wasn’t freely making love to him — only twice a week as arranged beforehand. The film covers in detail the last few weeks in the life of Joan, as it covers her brief life more than anyone else’s. It ends with her having a whiskey glass on top of her head and daring her drunk hubby to shoot it off with the gun he was to sell the next day to give him some needed money.

The film registers as a pretentious effort to capture the beat scene it seems clueless about. The whiny dialogue from the intellectuals was just as weakly presented as its failure to understand any of the noted characters it was portraying. This failed effort would have been better served if it wasn’t released. 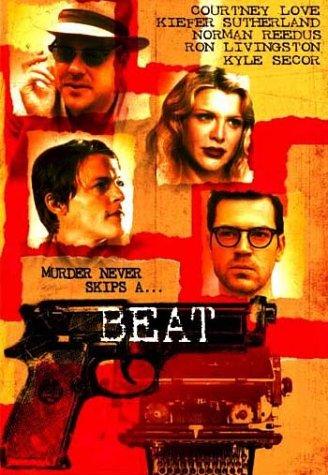