“It was just too bad that the story didn’t have more weight, or should I say some weight.“

A shallow coming-of-age film about an American tourist named Richard (DiCaprio) seeking adventure in a way that is not touristy, who travels to exotic Thailand to do his thing by finding something tangible to fill the void in his life. Richard wants something that is more real than the computer games he is hooked on. His adventure begins when he meets a Looney Tunes character named Daffy (Carlyle) in his second-class hotel and hears the monstrous looking lunatic rant about the perfect beach that is not found on the regular map and difficult to get to. Daffy imparts a few well chosen words to Richard, who takes it all in as if trying to show that he’s not the twit that he really is and is open to new experiences. The next morning Daffy blows his brains out, but leaves the secret map of this paradise nailed to his door. Not wanting to go there alone and attracted to the French girl Francoise (Virginie Ledoyen) who is staying next-door with her boyfriend Etienne (Guilluame Canet), Richard impulsively entices them to join him in this adventure.

The three backpackers, all in their 20s, reach an island close by their destination and stopover for the night. For some inexplicable reason Richard blabs about this secret island to some fellow American tourist dopers (Peter Youngblood Hills and Jerry Swindall), telling them his plans and even leaves them a copy of the map. Then he swims to the off the beaten path island with the French couple. But there are problems in paradise, as the intruders observe the island’s beauty but must pass through fields of marijuana that are guarded by unsavory farmers with AK-47s and machetes. Sneaking by them the intruders jump off the mountain side and swim to their destination — finding a pagan-like commune of pleasure seekers who have lived by the beautiful beach for a few years. The commune has been granted permission to stay by the marijuana farmers if they bring no more people into their commune.

The leader of the island is a British girl named Sal (Tilda Swinton) who is a true believer in the cause of seeking pleasure at any cost. She rules the place like a benevolent tyrant or a well-meaning mother who administers tough love. She lays down the rules to the newcomers and they can either accept it or get off her island, which is home to an international group of idlers.

The film can’t seem to be told without the voiceover from Leonardo DiCaprio, explaining his thought process and what’s going on.

There are a bunch of other nondescript yuppie/hippie inhabitants on this island but the only other one who stands out is black Britisher, Keaty (Paterson Joseph), who is gay and is a sports fanatic. Bugs (Lars Arentz-Hansen) is the only one on the island whom Richard doesn’t like and he is also the sometimes boyfriend of Sal.

As expected, the French girl falls for Richard and her boyfriend gracefully bows out. He seemed like a much nicer bloke than Richard…but such is life! The communal lovers of the beach spend their time on mandatory fishing assignments, smoking weed, fornicating, and taking in the sun. When their rice gets contaminated Richard is chosen by the leader to go to the mainland with her, where she seduces him and where she learns that Richard told others about the island. They make a pact not to tell the others about their sex and about the Americans who know about their secret place, but Richard fails to tell her that he also gave them the map.

The beach is the real star of the film, as the cinematography is scintillating. It is as if a real paradise was found off the Thai coast. The film itself wasn’t bad, as much as it was empty. There is just very little to digest here.

The film winds down with Richard banished from the commune and made to live in the jungle; his assignment is to take the map away from the newcomers. He takes on this assignment by going into a Viet-Cong mode, playing it as if it is a war video game. It made for some beautiful fantasy shots via computer graphics, but added nothing to the story.

The film concludes as a lesson that there is no such thing as a paradise on earth and if there were, it wouldn’t remain one for long because man’s desires are far-reaching. So it’s back to virtual reality for the DiCaprio character; the theme of the film seems to imply that maybe that’s not so bad a thing to be doing with your life.

The film was adapted from the 27-year-old Britisher, Alex Garland’s very popular novel. In an interview he gave for cable TV, he said he didn’t mind that this Hollywood film took some liberties with his story to juice it up sexually so we can see Leonardo romance the beautiful Virginie Ledoyen and have another affair with Tilda Swinton, additions that were not part of the novel.

The photography of that underwater kiss with Ledoyen was sensational, as they were lit up like Christmas trees from the opalescent plant life that surrounded them. The romance itself had no sparkles. Overrated director Danny Boyle (“A Life Less Ordinary”/ “Trainspotting”/”Shallow Grave”) is skilled mostly at getting energetic performances from the actors and having beautiful visual sets. Here, he is aided by the wonderfully gifted cinematographer, Darius Khondji, who makes The Beach look like a cross between the figment of one’s psychedelic dream and an ongoing computer game, something you can’t take your eyes off. It was just too bad that the story didn’t have more weight, or should I say some weight. The film played mostly like a travelogue. Don’t blame the actors for what went wrong, they did their job the best they could. The fault is all in the script. 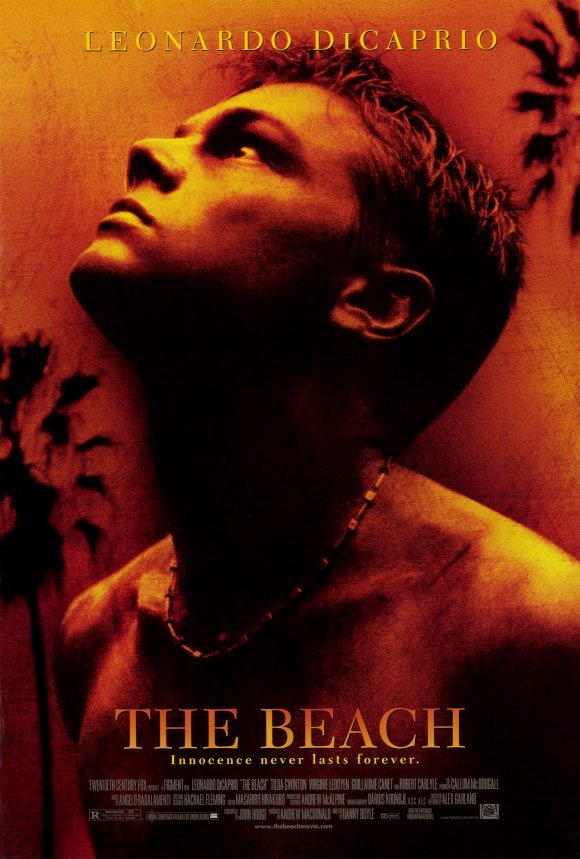