Satyajit Ray’s 28th and last film, he died in 1992, is one that he shot in radiant color. It’s as close as a film can come to being a masterpiece and not be one. It is much better than some of his recent films that have gone out of favor with the public, and is a good example of his old-fashioned humanistic way of shooting a film. This film is filled with the director’s deep feelings about the observations he has made during his lifetime regarding the affects of civilization, which he questions in a most astute way.

It is very much apparent that the great film director has made his swan song film very much autobiographical. Ray speaks through the hermit visitor to a niece he has not seen in 35-years, seeing her last when she was only a 2-year-old. The hermit returns to Calcutta, his place of birth, as an old man who is wizened for having traveled the world and for having lived among savages for most of his life.

The plot is rather plain. The great-uncle Mitra played by Dutt with a certain boldness and with a fierce sense of humor and with a proper restraint, writes in impeccable Bengali to his wealthy niece, Anila (Mamata), that he will visit her for one week and realizes the visit might come as a surprise to her; but, he wants to know if she can accept him and offer him the hospitality of a traditional Indian family visit. This causes concern for her husband Sudhindra (Depankar De), a successful and well-educated executive, as he fears the relative might be an imposter after their money. Yet he feels obligated to honor what is a traditional custom. Only their 11-year-old son Satyaki (Bikram) seems to be genuinely glad of the visit and easily accepts him as his uncle, intrigued by his knowledge and generosity of spirit.

When asked why he left his family and had no contact with them for all these years, Mitra animatedly tells them it was a case of wanderlust and the bisons he saw painted on the caves by the savages before the age of civilization. This encouraged him to become an anthropologist and not a painter and live among the different tribal people of the world. Mitra feels that no painter could learn the art better than the savages have. This makes Sudhindra more suspicious of Mitra than before, as he thinks that he is certainly scholarly and articulate and well-travelled but he might be this clever because he is really an impostor. So Sudhindra devices several ways to trap the visitor into telling the truth about himself; one, by having the visitor show him his passport, which he readily does. Secondly, by having his trial savvy lawyer friend, Prithwish (Dhritiman), cross-examine Mitra. The family has no other way of confirming in a hurry if he is really their uncle.

The confrontation between Prithwish, who is a defender of rationalism and science, comes about through a series of questions. He does his best to bring out the uncle’s beliefs which are in the virtues and superiority of the primitive culture over the civilized one, agreeing with him only that religion sets up barriers between people and causes more harm than it does good. But Prithwish is worn down after an evening of sharp conversations and feels badly deflated that his arguments don’t hold up that well, and embarrasses the family by leaving angrily and telling the uncle that he should either prove who he is or leave. While the uncle only seems more anxious after this exhausting talk to clear up some business he has to take care of and to get back to his tribal people, where he feels more comfortable than with the bourgeois family.

Ray’s choice of traditional music and primitive folk dance numbers when the uncle sees his niece dance with the women members of the Santhal Tribe, is a reminder that we shouldn’t forget our roots. The opulence and warm-hearted nature of the film overcame its lack of real suspense and predictability. Ray’s light touch and simple human gestures with the camera, poured out a delightfully intellectual array of food for thought. It allowed it to be both visually entertaining and a homage to a great director’s creative life, questioning and stirring up his audience to keep knowing more about themselves and the world they live in. Ray leaves us with this last eloquent film, one that has his signature firmly implanted on it. 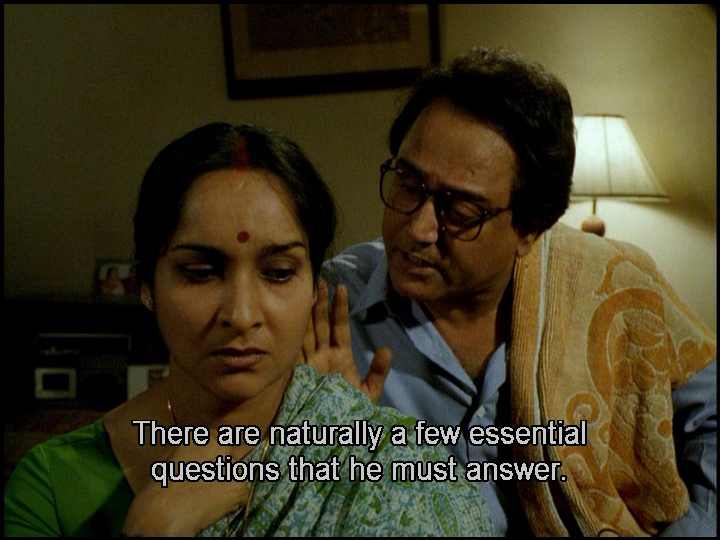