“An all-star ensemble cast consisting of the who’s who of British films can’t save the war epic from being a bore.”

The big budget Brit epic on WW II compares favorably with America’s war epic The Longest Day (1962), which is another way of saying they are both tedious films laced with trite dialogue. An all-star ensemble cast consisting of the who’s who of British films can’t save the war epic from being a bore. Aside from the many air battle sequences, the film lacked any spark, dramatics or emotional appeal. Guy Hamilton (“Goldfinger”/”Funeral in Berlin”/”Force 10 from Navarone”) got the dogfight scenes right between the heroic RAF and their counterpart Luftwaffe, but little else was moving as the story remains grounded.

It offers an unabated reverential treatment of the RAF and details the Battle of Britain conflict, which turned the tide of WW II in favor of the good guys. British Prime Minister Winston Churchill said in 1940 to the House of Commons “Never in the field of human conflict was so much owed by so many to so few.” After the evacuation of Dunkirk and Britain’s rejection of Hitler’s offer for an armistice, Britain stalled for time to get its war machine up and running. The Battle of Britain lasted six weeks and included the worst of the London Blitz. As the RAF gained strength with some help from Polish Freedom Fighters, Goering’s massive attack is repelled and the order to invade Britain is cancelled.

Laurence Olivier as Sir Hugh Dowding, head of RAF Fighter Command, gave a convincingly sharp performance. He boldly told the Prime Minister “to maintain protective strength in Britain during the battle for France” and later that “Our young men will just have to shoot down their young men at the rate of five to one.” Also top-notch were Trevor Howard as the Air Vice-Marshall and Michael Caine as a squadron leader.

The technical advisers for the British side were air aces of the Battle of Britain, Ginger Lacey and Bob Stanford Tuck; while for the Germans the technical adviser was Adolf Galland, the Nazi air ace who led the battle from the enemy side.

Upon its theater release, the film lost ten million dollars. 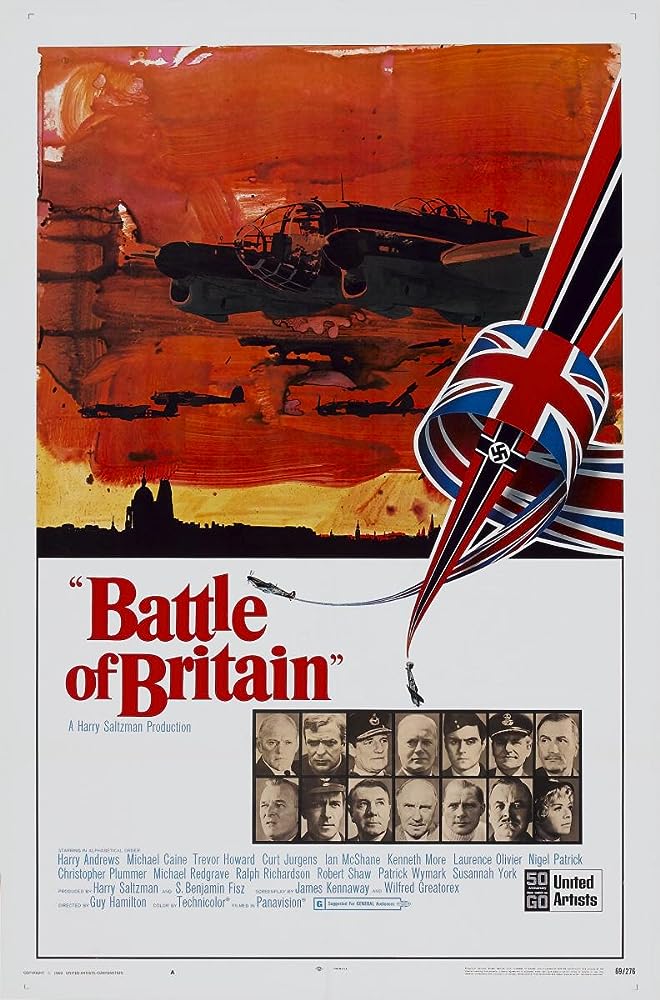