“Tedious but well-photographed atmospheric jazz pic from the Prohibition era.”

Tedious but well-photographed atmospheric jazz pic from the Prohibition era. Its best moments are the great Ella Fitzgerald belting out Hard Hearted Hannah and the opening black funeral for a jazz musician in New Orleans, in 1915. The film’s other jazz singer, Peggy Lee, stylishly sings Sing A Rainbow, even while playing a straight dramatic role as a fading singer hitting the bottle. Ms Lee received an Oscar nomination for Best Supporting Actress. TV’s Dragnet star Jack Webb(“Dragnet”/”The D.I.”) produces, directs and stars. It’s tiredly written by Richard Breen. Even if it makes an earnest effort to recreate the jazz and gangster scene in the 1920s, it nevertheless is a lifeless pic with the dramatics less than compelling. Though, to its credit, it depicts the jazz players with great sympathy and understanding.

Pete Kelly (Jack Webb) is the cornet player and leader of a struggling jazz group in Kansas City, in 1927. They play in a speakeasy run by the sleazy cheapskate Rudy (Than Wyenn). The boys stick with Rudy until ruthless bootlegger Fran McCarg (Edmond O’Brien) forces the jazz band to work for him or else. Instead of the usual ten percent split of the earnings, the gangster demands twenty-five percent. When the band’s young drummer, Joey Firestone (Martin Milner), voices in public his displeasure of the racketeer it results in him thrown through a car windshield. In a later incident, Fran’s thugs gun the hothead down in the speakeasy for continuing to voice his disapproval of the crime boss.

Meanwhile Pete reluctantly begins a relationship with Ivy Conrad (Janet Leigh), whose parents are wealthy. At the same time Pete tries to look out for his boys, as he deals with Fran.

Andy Devine plays the determined strong-armed detective trying to use Pete to put the gangster behind bars. Lee Marvin plays Webb’s clarinetist band member, who forms another band when Fran muscles in.

The melancholy pic thrives on realism. Too bad it wastes a good jazz score on a dull gangster story. 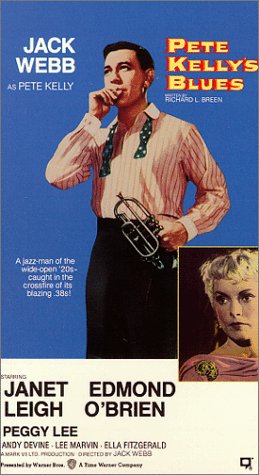