“The pic’s strangeness becomes its strength.”

The talented young director uses long tracking shots and glaring close-ups that are as detailed as possible, and it’s filmed at a leisurely pace. It seems anxious to clue us in that there’s a heavy guilt trip paid for living in a Catholic country exposed to so much temptation. The director also shows us that Mexico City has some fascinating geometric designs that might go unnoticed in the city’s hustle and bustle without taking time to explore the city through aerial shots.

The impoverished Mexico City dwelling Marcos (Marcos Hernández, the non-actor is the real-life chauffeur for Reygadas’s father) is a sullen man of few words, who is an overweight, middle-aged chauffeur who for the last fifteen years drives for a wealthy Mexican general and is entrusted to drive the general’s dread-locked, heavily tatted and body pierced friendly but spaced-out young adult daughter, Ana (Anapola Mushkadiz), who when not living a comfy bourgeois life secretly gets her kicks working in an upscale brothel as a prostitute–a secret guarded by Marcos.

Marcos is distraught when he learns the baby of an acquaintance (Rosalinda Ramirez), that he kidnapped with his loving fatty wife (Rosalinda Ramirez) for ransom, has accidentally died. Feeling guilty he confesses to Ana, who tells him to turn himself in. For the remainder of the story, Marcos seeks redemption for his crime and in his twisted mind finds a way to punish himself in a religious ritual with self-degradation by crashing a massive pilgrimage taking place in the city and also by lashing out with a fatal stabbing at the only stranger who showed him any love.

That the hero is a lost soul, who has no idea of why things didn’t work out for him, underlines a film that will not feed you easy psychological answers for the crimes but settles for being richly shot as a visual treat, one that looks like a photo album with photos trying to tell such a personal morbid and senseless story instead of a literary narrative The pic’s strangeness becomes its strength, as it is aesthetically pleasing and then some, even if not completely satisfying in a rational narrative sense. It tries to ruefully convey to us that forgiveness comes only from within and not through some outside force, and in its own quirky way gets home its point that it’s no accident that Mexico is such a fucked-up crime-ridden country. 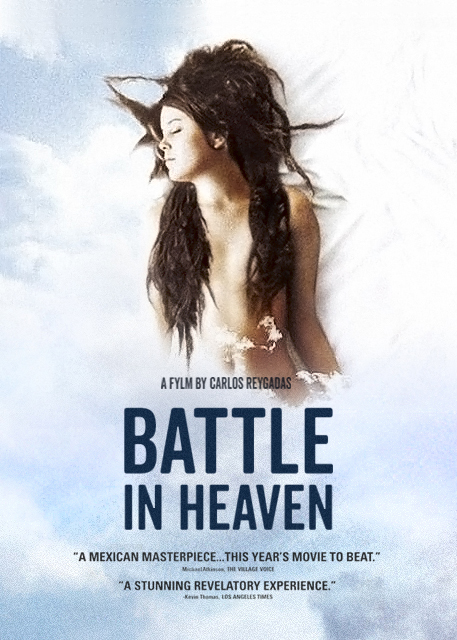