“Gritty re-enactment of the Battle of the Bulge.”

William Wellman (“Story of GI Joe”) superbly directs this dramatic war film that many considered, at the time, as the definitive WWII movie (closest competition might come from Gregory Peck in the 1949 Twelve O’Clock High). Producer Dore Schary moved from RKO to MGM and insisted on making this film to the objections of his boss Louis B. Mayer, who thought the public wanted to forget the recent war and wouldn’t support such a bloody film. He was wrong, just as Howard Hughes over at RKO was wrong before, and because of the film’s tremendous commercial success Schary gained status at the studio and later on the board members fired Mayer. The film won Oscars for screenplay (Robert Pirosh) and cinematography (Paul C. Vogel).

Battleground is a gritty re-enactment of the Battle of the Bulge as fought by the American elite 101st Airborne Division, endearingly known as the “Screaming Eagles,” in December 1944, against the elite German Panzer Division led by General Heinrich von Luttwitz. The film centers on the 3rd Platoon of Company I and their skirmishes in and around Bastogne. Surrounded by the Germans, who outnumbered the Americans ten to one, in freezing conditions and the battlefield covered in fog so planes couldn’t send in fresh supplies, General McAuliffe replies “Nuts” to the German offer of surrender to save lives.

The film works best showing the soldiers battling both the elements and the Germans in the snowy fields of Belgium under the chaos of war. They are led by their hard-nosed, cigar-chomping, top sergeant, Kinnie (James Whitmore), who treks on despite his feet suffering from frostbite. Pfc. Layton (Marshall Thompson) is the “everyman” recruit, who becomes quickly seasoned under fire and becomes less fearful. Pfc. Holley (Van Johnson) gets the most film time, as he comically grabs an egg from the farm of Denise (Denise Darcel) and has a difficult time getting to eat it out of his helmet as the orders keeping changing and his platoon has to keep moving on. “Pop” Stazak (George Murphy) is the old man of the outfit, in his late thirties, who has been granted a last minute hardship discharge but can’t leave the battlefield. Roderigues (Ricardo Montalban) is the religious Latino, who has been befriended by Pop. Jarvess (John Hodiak) is the newspaper columnist from Kansas, who enlisted in a surge of patriotic duty.

This realistic and unattractive look at the hardships of war influenced later war films such as Platoon, as it set the tone of how to make a war film that could be both entertaining and chilling without phony heroics. Though time has not been kind to Battleground as many of its classic scenes now seem stilted and outdated, it still packs a punch. 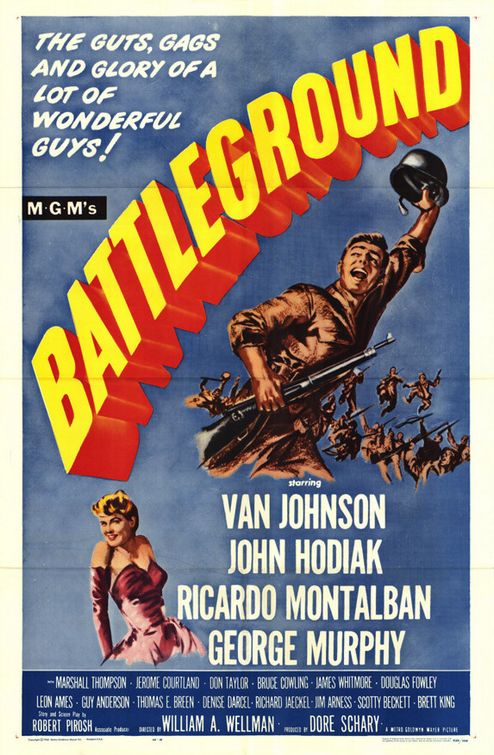