“The story line had the stench of a locker room.“

An old-fashioned “jock” flick, notwithstanding that all the basketball players are white and the game seemed played in slo-mo. This one plays as a moralistic tale about the temptations placed before young athletes, and how the hook goes into them so they succumb to fixing games. Everything about the story is obvious, and it ends as predictably as it begins. It plays like an old newsreel piece; a study of a different era that has little relevancy for today. It was second-rate as far as acting and the story line had the stench of a locker room. This B-film programmer was probably modeled after the college basketball scandals involving City College and LIU, and a number of other major colleges that took place during the 1950 season. The scandal virtually killed these two schools as far as ever returning to big-time college basketball.

The film opens with a worried sports columnist, Pete Ferreday (Ireland), defending his friendship with star freshman basketball player for State University, Johnny Long (Thompson), as a newspaper colleague utters with disdain: “Earn your bracelet with a college degree.” Pete then explains how he first met Johnny and why he cares about him even though he was arrested for fixing games. Pete is the voice of conscience, trying to be fair to the jocks and to the public that loves sports.

Johnny is a star player on his local high school. He’s a nice young man who takes care of his kid brother Mickey (Hyatt) while their father is in a sanitarium. Johnny has money problems and wishes to stay close to home in his choice of college, as he needs to support the family with part-time jobs. Pete hooks him up with veteran coach Nat Becker (Sande) at State University, and gets Johnny a basketball scholarship. For the summer Johnny finds work at the wealthy country club Cresthaven, where the basketball team’s captain also works summers. Here Johnny meets an attractive girl, Pat Judd (Brown), and seriously romances her, but he also meets a manipulative sports gambler named Mike Taft (Bishop). Mike offers Johnny material favors with no strings attached. But when the basketball season starts, Mike offers him money to shave points. Mike argues that he could still win the game, if he plays it right. At first Johnny resists, but he soon sees Jed is easily doing it. When Johnny wants to buy Pat an engagement ring and doesn’t have the money, he decides to accept the slimy Mike’s money. The jeweler tips off the vice squad that the college athlete bought a ring for a $1,000 and they tail him, which leads to his downfall.

The best quote comes from Mike: “The longer they take to be bribed — the harder they fall.” 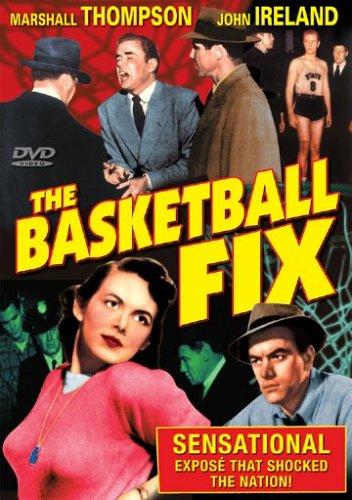