“The film was weird, but not funny or meaningful.“

This is a one-joke lifeless film version of Herman Melville’s enigmatic 1853 tale, Bartleby the Scrivener,about a Wall Street clerk’s passive withdrawal from his office routines. It does an injustice to the anti-capitalist meanings it was meant to convey, though it’s faithful to the literary workings of the novel. But something got lost in translation from print to film. It’s updated to take place in an isolated office building on a hill above the freeway. The small bureaucratic private firm clerical staff handles public records for the city, after landing a lucrative city contract. The protagonist, Bartleby (Crispin Glover), worked before in the post office dead letter department (one of the film’s many metaphors about neglected workers) before the office moved. He’s an oddball dressed in a neat businessman’s suit and stuck with a ghost-like frozen expression on his kisser and hair plastered back Frankenstein style. He responds to every request by saying, “I would prefer not to.” Crispin Glover is a natural for this role, but the script leaves no room for subtleties as he’s viewed primarily as a candidate for the loony bin. Which is why the film never worked for me. Since the guy is nuts, it was hard to go Kafka on him and read things into him that Melville did. David Paymer uses his deadpan expression to be the eager to please boss and the all too willing narrator of this tale, as he futilely tries to reason with his wacky employee. The film is about the decent humanitarian Boss and his relationship with the eccentric and unapproachable Bartleby, who chooses to stare at a dusty air-conditioning vent in the ceiling all day instead of working. The belabored point about the absurdity of the workplace is detailed in an uncompromising surrealistic style juxtaposed against a cheerless office decor of garish lime and mustard colors, as the message about the work being unimportant was delivered visually at the 10 minute mark and nothing new was ever added.

There wasn’t enough material for a 10 minute movie much less one of 82. I would have preferred not to have seen this flick and should have spent the time to reread a book I barely remember reading in my youth. The film was weird, but not funny or meaningful. Jonathan Parker is the former musician, who is the first-time director, the writer along with Catherine di Napoli, and the producer. He was ensnared in a film separated from any contextual reality. It’s very difficult to make such abstractions come to life, and Parker’s efforts might be valiant but his results are not.

The plot turns when the Boss feels he needs some extra help, so he puts a so-called honest ad in the papers and only Bartleby shows for the interview. The man is quiet to the point of almost being mute, and immediately shows signs that he’s mentally impaired. Yet he’s hired. He is contrasted with the so-called normal workers. The sexy and flirtatious office manager Vivian (Headly) and the two obedient but childishly playful clerical workers, the always complaining and slovenly Ernie (Chaykin) and the macho wise guy Rocky (Piscopo).

When the Boss brings a date back to the office to score, he’s disturbed to find Bartleby living there. Bartleby soon refuses to notarize some city records and then refuses to do any work, and the patient Boss at last fires him. But Bartleby refuses to leave the premises, so the logical Boss illogically moves the office. This results in Bartleby’s new landlords evicting him and the guilty Boss tracking him down living homeless under the freeway. The Boss through his efforts to find Bartleby, gains enlightenment about the alienation in the workplace and writes a book about that experience that no one publishes.

As far as I can remember, this is the only film version of a Melville novel that displeased me. I loved Claire Denis’s recent film “Beau Travail,” which was based on “Billy Budd”; and, I admired Léos Carax’s “Pola X,” based on the novel Pierre. But this satire on capitalism never registered with much wit. Also the Paymer character never worked as a reasonable one to counter the nutty Bartleby, and Paymer’s silly end of film conversion came without a plausible reason to be converted. 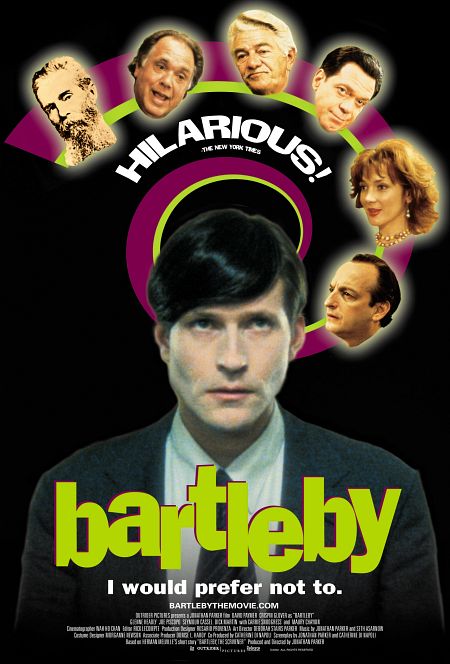