“An uncompromising psychological drama, presented as a religious parable.”

Robert Bresson’s follow-up to Au Hasard is adapted from the novel Nouvelle histoire de Mouchette by Georges Bernanos (the Catholic writer also wrote in 1951 Diary of a Country Priest, which became Bresson’s breakthrough film). It’s an uncompromising psychological drama, presented as a religious parable, exploring such tribulations of life as faith, hardship, solitude, and abuse. Using nonprofessional actors Bresson gets them to brilliantly play their parts in the natural, whereby it becomes a sublime movie experience expressing what it’s like to live without another person to trust in a place that is spiritually bankrupt and filled with immoral behavior (in other words, to live in a private hell).

Mouchette (Nadine Nortier) is a sullen 14-year old peasant girl living a miserable life in the sticks. Neglected by both her terminally ill mother and her abusive alcoholic father, the unremarkable but feisty youngster (purposely tracks mud in church and throws mud at her sneering classmates) is left on her own to take care of the baby, deal with her ostracism at school, the leers and suggestive jibes from the country boys, and the cold looks from the locals. Rural life is barren and harsh at home, in town and at school; Mouchette’s life seems hopeless. Her miserable existence is viewed by Bresson as not any different from those who are victims of a cruel society and are helpless to stop that treatment, as Mouchette’s mental pains are comparable to some degree to a Holocaust victim.

With no one to look after her, Mouchette walks home from school by going through the woods and while lost encounters at night during a rainstorm the game poacher Arsene (Jean-Claude Guilbert), who frets he killed the game warden Mathieu (Jean Vimenet). She willingly goes along with his plan for her to provide an alibi, saying she hates everyone in the village. In his cabin, he has a seizure and she nurses him back to recovery. Instead of showing kindness, he rapes her and she spends the night there. Returning home, her mother dies but not before confessing that she’s been a slut and hopes her girl will be good. Sent on an errand to get milk for the baby, Mouchette meets only more hostility from the villagers. We watch a rabbit shot by a hunter die and Mouchette appears near the same spot and without warning or emotion takes her own life–believing her life is worthless.

In the end, Mouchette’s inability to connect with others can be seen as not only her problem but all of humanity’s problem–we are all Mouchette. Her cross she bears is everyone’s suffering and not subject to a dogmatic religious belief. That the film worked so well as a rewarding and insightful spiritual experience is because Nortier seemed so genuine and her anger so real, as she displays both an animal ferocity and innocent vulnerability for her role. The unorthodox angel turns out to be just the right kind of guide to take us on a journey through life’s paradox. A defiant work of clarity, a masterpiece of filmmaking, coming down hard against a rigid backward society to make the thinking viewer all the better for understanding how cold life is without compassion. 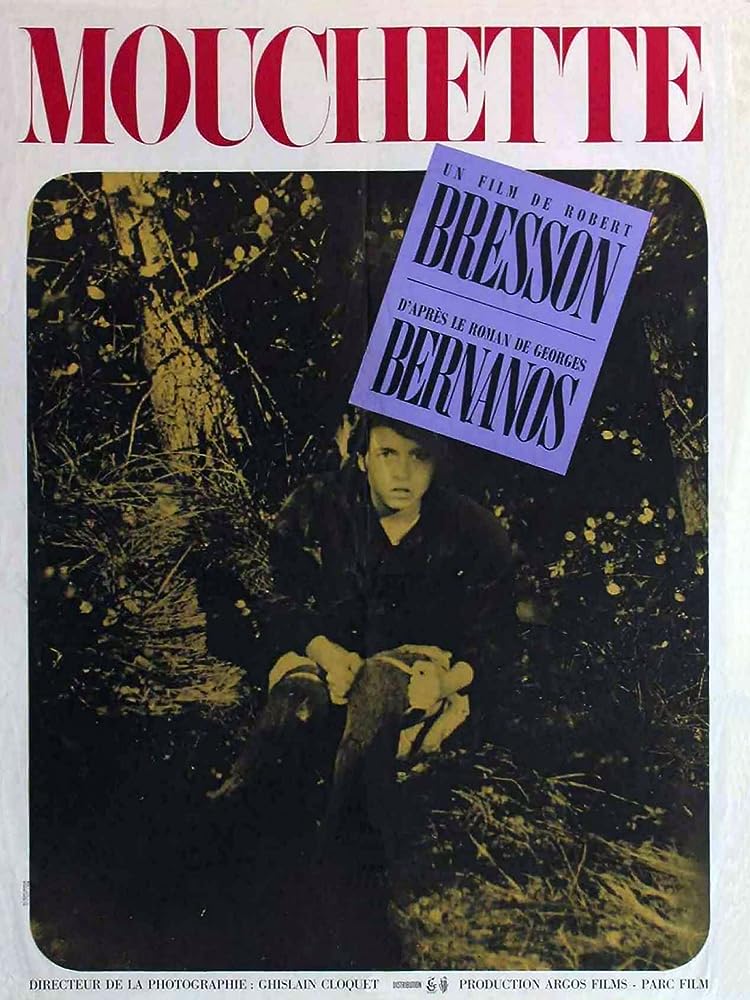