“It should be considered as one of the most unfunny comedies ever made.“

The 60-year-old Jerry Lewis (“Hardly Working”/”The Big Mouth”) is at his worse, in his last feature film where he starred, directed and wrote. A film that was shelved in the States after a poor preview in Kansas City and was released only overseas under its original title Smorgasboard. It should be considered as one of the most unfunny comedies ever made by him or anyone else.

The slightly plotted film consists entirely of vignettes and dumb sight gags, such as Jerry falling off slippery furniture and destroying automobiles. It’s co-written by Lewis and Bill Richmond. It has the distinction of not making me laugh even once.

Warren Nefron (Jerry Lewis) is a middle-aged man unable to kill himself and goes to see a psychiatrist (Herb Edelman), wanting to be cured from being a misfit. While on the couch Walter has flashbacks about being a klutz as a child dropping things on the street as he crosses to go to school, tracing his family history from 15th-century France as an inept coachman.

Other misguided vignettes has Jerry trying to escape from a French prison, thinking back to his classical musical conductor father screwing up while performing, an inane bank robbery scene where the gang leader played by Jerry goes into a dance routine in front of the security camera, the football player Dick Butkus as a health counselor who punches out those that can’t quit smoking, Milton Berle in drag telling Jerry’s shrink about being a loose woman and then putting the make on Jerry in the waiting room, Jerry in a hotel doorman costume as he’s asked by Sammy Davis Jr. to get him gas and at the exact-change station gets stuck up by the attendant instead, Jerry’s misadventures on the economy Jolly Fats Weehawken’s Airline and many other equally unfunny bits. Cracking Up is proof that Jerry Lewis is not Jacques Tati, and his slapstick comedy can be shallow if there’s no one to control his at times moronic artistic urges.

Arguably his best films such as The Bell Boy, Scared Stiff and The Ladies Man were at a different time, when the young Jerry could almost completely get away with acting infantile and make it comical. 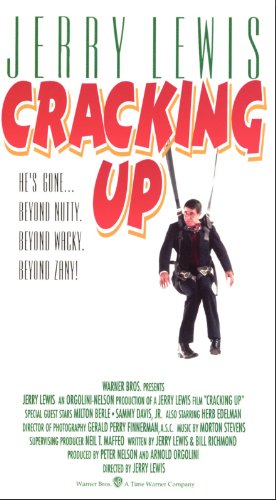