“…the story died from lack of conviction on the director’s part.”

A much imitated genre type of ‘buddy film’ that is lazily directed and edited, stealing scenes such as its ‘talking head’ one from either Levinson’ own “Wag The Dog” or from Woody Allen’s “Sweet and Lowdown.” It also stole its motel bedroom curtain down the middle of the bed scene for its soon-to-be lovers from Frank Capra’s classic flick “It Happened One Night,” which starred Gable and Colbert.

It was a likable enough film about bank robbers who falsely make a case for themselves as being Robin Hood figures (the banks are insured in their accounts for up to $100,000, so no one loses). It also acted as a diverting lightweight romantic-comedy romp about two opposite-type of guys trying to win over an unhappily married honey. Its strong point being how it was splendidly photographed by Dante Spinotti and how charismatically it was acted by the leads, otherwise the story died from lack of conviction on the director’s part.

This forgettable heist story from the inconsistent director, Barry Levinson (Sphere/Diner), whose best flicks are connected with the Baltimore scene, was short on staying on target as it tended to get lost in too many wasted scenes that repeated its running gag routines far too often. It was at least 30 minutes too long and had its inconsistencies built into the story, as it tried to be an updated version of “Butch Cassidy and the Sundance Kid.” By the time the film comes to its disappointing finale, it had already jettisoned its romantic triangle and seemed confused as to what it had to say about buddies. It tried too hard to be off-beat.

Told annoyingly through flashback, it grates with a continuous crosscutting of an interview that Joe and Terry give to a self-inflated reporter. It copied the real-life crime TV program “America’s Most Wanted.” Here it is called “Criminals At Large” and is hosted by Darren Head (Slayton).

The film begins with the bank robbers trapped in an LA bank that is surrounded by the police. The bandits are arguing among themselves while trapped in a ‘Mexican standoff’ after supposedly being betrayed by their woman accomplice. The TV program is airing at the time of this standoff an exclusive interview the two bank robbers previously gave them.

The TV show tells the story of the “Sleepover Bandits” using the robbers’ version of what they did, as their M. O. is to sleepover in the house of the bank manager the night before they rob the bank and in the morning they take the manager to the bank where they are polite in a simple-minded way but forceful in getting the manager to open up the vault without the alarms going off. They become the most successful bank robbers in the history of the United States and as the TV host says in the voiceover, they are part Bonnie & Clyde and part Barnum & Bailey.

This film is proud that it steals from Bonnie and Clyde and many other films, and it doesn’t seem to care that it doesn’t have enough passion or commitment to give us some original caper stuff and characters who can be developed.

Joe Blake (Willis) and Terry Lee Collins (Thornton) become friends in an Oregon prison and after a spur of the moment decision cartoonishly break out of jail in a cement mixer truck. They become partners and go on a bank robbing spree with the goal of heading to their chosen Mexico paradise and hope to open up a fancy legitimate nightclub resort. These celebrity crime figures hope to lead a comfortable life of drinking margaritas and hanging out by the pool.

One of the running gags is that the sensitive and mild-mannered Terry is an obsessive-compulsive type who is always kvetching, a hypochondriac with facial tics who is unsure of himself and is constantly worried about his medical condition; while Joe is the confident, handsome, cool, macho action type of guy.

The escapees hook up with a front man, Harvey Pollard (Troy Garity, Jane Fonda’s son), Joe’s cousin, who is a would-be stuntman. He adds some comedy antics by becoming the getaway driver. But during these scenes, the film loses its direction and the comedy seemed forced.

Added to the male trio is a bored, rich housewife, with the shiniest redhead hair I have ever seen, Kate (Cate Blanchett). Kate becomes furious with her inattentive hubby who is too busy for her, whom she prepares a sumptuous gourmet dinner he turns down because he has business on the outside. Kate cooks the meal while lip-synching along to the song called “Holding Out For A Hero.” Angered at her hubby Kate goes for a wild ride in her Mercedes Benz singing along with the car radio playing her idol Bonnie Tyler’s tunes, and she literally bumps into Terry. Terry brings Kate over at gunpoint to the gang’s rendezvous spot. Kate likes being associated with them as it gives her life some excitement, and she soon advances to being an unofficial member of the gang. There’s comedy in this group of quirky characters, as Kate begins affairs with first Joe then with the sad-sack Terry. She comes to the conclusion that together they make the perfect man, as she falls for both of them.

This easily digestible meal of sight gags (one of the running gags is the numerous disguises they wear on their robberies) and the ongoing fluff (such as the men dancing and fighting over their dream girl) has its common man appeal. There’s a great comic performance by Billy Bob Thornton and great chemistry between he and Kate, but the film fails to offer much else besides that to hold your attention. 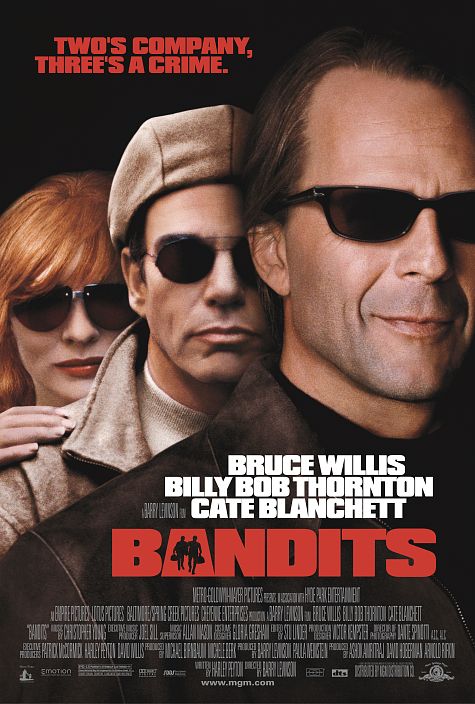