Writer-director Andrew Niccol’s flatly drawn political satire chronicles the 18 years in the life of Ukranian American émigré Yuri Orlov (Nicolas Cage). His family fled the Soviet Union in 1980 by pretending to be Jewish and lived in Brooklyn’s Brighton Beach section (called Little Odessa because so many Russians favor the area). After Yuri witnesses a gangland assassination, he eschews going into his father’s restaurant business to establish himself instead as top dog among international arms dealers.

It’s smugly directed as a political warning for those completely clueless that freelancing amoral arms dealers and major countries with political agendas like the USA are responsible for continuing the ongoing killings all over the world. It’s a film that yearned to be a documentary and reveal some inside info on how lucrative and deadly a business is arms dealing, and how legitimate major countries play a big part in keeping warring armies armed. Though informative, even if telling what’s common knowledge, and at times darkly humorous, the action story never develops or becomes engrossing. It remains slightly intriguing only because one gets the feeling it’s telling the truth about how arms circulate throughout the world. If you subbed drug dealer like the one in Scarface for arms dealer, you’ve still got the same formula and the pic wouldn’t miss a beat as entertainment about a character meant to be reviled but is fun to watch because he’s leading such an exciting life. Unfortunately this film loses its thread, unable to mix entertainment and action with its sobering tale, and the only thing that remains intact is that evil does have the face of this banal arms dealer.

The film comes with a mostly offscreen narration by Cage who tells his tale via flashback in a wryly humorous and unapologetic manner, whose cynical greedy character never seems anything but a composite figure of all arms dealers. Yuri’s aim is to sell everyone in the world a weapon, confirming a stat that as of now one-out-of-every-twelve people in the world are armed. As an afterthought, there’s a human interest story tacked on to make him more human. But that never works because it seems so fake. In this side story, Yuri charms his world famous model dream girl Ava Fontaine (Bridget Moynahan) he meets under false pretenses by renting a hotel to himself and luring her there with a false photo shoot. Yuri never reveals the lie but instead marries her without letting on the true nature of his enterprise, and we’re supposed to believe she never discovered he’s a natural liar and gunrunner leading a double life until much later. It’s a superficial Hollywood fantasy romance story that was just too unbelievable and poorly played out to do anything but sink the film into murky waters.

The heart of the film relates Yuri’s big break coming when the Soviet Union starts falling apart in the 1980s, and during the chaos he returns to the Ukraine to make deals to steal weapons and sell them to developing countries. Africa becomes his biggest market, as the country with the most ongoing wars. Needing someone he trusts to watch his back, Yuri makes his brother Vitaly (Jared Leto) a partner. But his brother is cut from a different cloth and soon becomes an unreliable coke addict who is in and out of rehab. Yuri goes it alone and discovers he has a flair for this business, and becomes friends with many dictators including the particularly ruthless one in Liberia (Eamonn Walker). All the time he rationalizes that if he weren’t doing it someone else would and that he’s just the supplier and not the one who pulls the trigger, therefore taking no responsibility for his actions.

Relentlessly tracking down Yuri is seemingly the only honest law enforcer on this planet, Interpol agent (Ethan Hawke). The two one-dimensional characters have many contacts during the course of the film. But none are dramatic, and their encounters seem better suited for a comic book story.

The film’s most powerful moment (which might be its only powerful moment) has Yuri deliver a climactic speech where he states that the biggest arms dealer in the world is the president of the United States. For that reason alone this mainstream film, as flawed as it is, still has some value as it delivers some measure of truth. 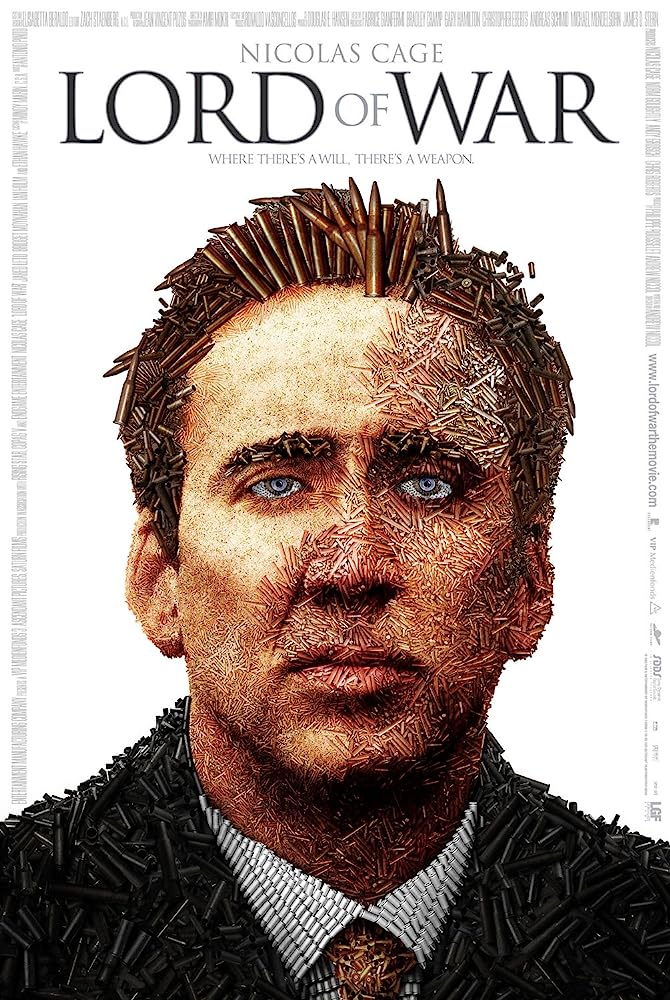