“A lively but muddled Western that never quite makes much sense.”

A gimmicky b/w B Western that groups a number of outlaws together into one movie in order to enliven things and possibly draw a greater audience. We have Randolph Scott as an earnest Texas sheriff meeting the likes of the James Gang, the Daltons, Sam Bass and Belle Starr as he paves the way for a lawless territory known as Badman’s Territory to become part of the Oklahama Territory and receive the protection of the Union. The result under Tim Whelan’s spirited direction is a lively but muddled Western that never quite makes much sense.

The James Gang rob a Texas train in broad daylight and are chased by local sheriff Mark Rowley (Randolph Scott), his younger deputy brother John (James Warren), and deputy Dan Mercer but are interfered with by crooked marshal Bill Hampton (Morgan Conway). Ignoring Hampton’s order to go in a different direction, opposite from where the outlaws were heading, the lawmen come upon the outlaws and capture their lookout man Kid Coyote (George “Gabby” Hayes). But Mercer is shot in the back by one of the escaping outlaws, Hank McGhee. Later Hampton tries to kill Coyote as John’s escorting his prisoner back to town, but instead wounds John who tries to protect his prisoner. Hampton is stopped from executing both by the arrival of Jessie James (Lawrence Tierney), who feels obliged to take the wounded heroic deputy back to Quinto (the lawless town is located in Badman’s Territory, a place where the U.S. law has no jurisdiction and has become a safe haven for outlaws). Hampton then frames John by stating he’s part of the James Gang, which Mark doesn’t believe for a second and decides to go on alone to rescue his brother in Badman’s Territory. On his way into town Mark meets earnest Englishwoman Henryette Alcott (Ann Richards), who is the crusading editor for Quinto’s newspaper. A romance develops and Mark tries to help her get a petition from the good citizens to join the new Oklahoma Territory and bring in law and order.

The film goes off in many different fractured directions as the storyline gets involved with the famous historical gangs, the crooked activities of the local citizen leaders and such things as square dances and horse races. It leads to the unscrupulous politician Hampton getting appointed to be marshal in Quinto after it was accepted into the Oklahoma Territory, and with him charging the Rowleys as being part of the James Gang and therefore wanted by the law. The final shootout was just as senseless as the plot line, as it left me scratching my head more than Gabby Hayes scratched his beard. 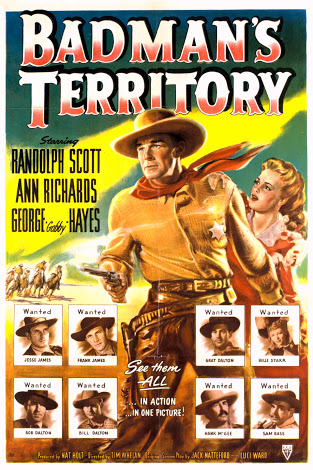