“It’s most memorable due to the heartfelt sterling performance by the seventy-something Victor Seastrom.”

Sweden’s legendary filmmaker Ingmar Bergman (“Fanny & Alexander”/”After the Rehearsal”/”Cries and Whispers”) directs this warm humanistic psychological drama, one of his great and more simple films that had little to do with religion, that was inspired by a drive he took to his grandma’s house and wondered what it would be like to envision his childhood friends there. It’s most memorable due to the heartfelt sterling performance by the seventy-something Victor Seastrom, who turned to acting in his native Sweden after an early stint in Hollywood as one of the great silent film directors. He directed such delightful films as Lillian Gish in the 1928 classic “The Wind”and Lon Chaney in the 1924 “He Who Gets Slapped.”

The retired and widowed grouchy 78-year-old Professor Isak Borg (Victor Seastrom) has a disturbing nightmare about a runaway funeral carriage, a clock without hands, a man without a face and his impending death the night before he’s to fly to Lund University from his country retreat where he has withdrawn from life to write his memoirs. He’s to receive an honorary degree for 50 years of distinguished medical practice and upsets his bossy loyal fusspot elderly housekeeper of the last forty years, Agda (Jullan Kindahl), by changing plans to fly there and instead go by car. His pretty daughter-in-law Marianne (Ingrid Thulin), who has been staying with him for the last few weeks after a marital dispute with his doctor son Evald (Gunnar Bjornstrand), decides to join him for the car ride to return back to her hubby in Lund for a reconciliation.

Along the way the professor stops off at his childhood home in the country and while standing by a wild strawberry patch recalls some powerful childhood memories. He recalls how he lost his childhood sweetheart, his cousin Sara (Bibi Anderson), to his more forward brother Sigfrid Borg (Per Sjöstrand), and how that loss still hurts. He’s approached by a teenage girl named Sara (also Bibi Anderson), whose dad now owns the house. The lively girl reminds him of his first love, so when the virginal girl asks for a ride with her two youthful male traveling companions, Anders (Folke Sundquist) and Viktor (Björn Bjelvenstam), he agrees. The playful and sometimes argumentative college trio (the men are rivals for Sara’s affection, though she favors Anders) are heading to Italy for a summer vacation. While filling up at the gas station of the rural town where he served as a doctor, the attendant (Max von Sydow) glowingly remembers him for being the best doctor they ever had and refuses to charge him for the gas. At his ninety-something mother’s house the professor stops by to chat and reminisce with her about his childhood. She complains that Isak is the only one of her ten children still alive and that her many grandchildren don’t visit unless they need money. When on the road again, the professor’s car just eludes a speeding car taking a curve while on the wrong side of the road. The near fatal accident, whereas they go unscathed but the other car goes off the road and can’t be driven, was caused by a disputing hostile couple, the Almans, who are verbally abusive to each other and lost concentration behind the wheel. They are given a lift and as they continue to bicker their bad marriage reminds the professor of his unhappy marriage, where he was emotionally cruel and standoffish to his adulterous wife Karin. When the couple’s dispute gets too heated, Marianne asks them to leave to spare the youths from becoming disillusioned about marriage.

The journey continues to Lund as the professor relives his life through more dreams (including a harsh one where he’s judged by the husband of the wife he misdiagnosed and she died), flashbacks and memories; and he confronts his past mistakes, his mortality and that his life was empty due to his egotistical ways, stuffiness and inability to find love. The formal ceremony goes off without a hitch and he retires to his son’s house, and tries to strike up a conversation with his son who treats him respectfully but coldly. The youthful trio treat him as a beloved hero and before departing for Italy, serenade him under his bedroom window.

The entire story took place over one summer day, and the director skillfully manages to point out his protagonist’s many shortcomings as well as his strengths. The constant shifts between the past and the present were seamless, and it all ends on an optimistic note that the inspiring professor (outwardly self-satisfied but inwardly festering from old wounds and feelings of failure) has a chance to change for the better and correct some of those past mistakes before it’s too late. If the film can be faulted, it’s for carrying too much symbolical baggage on the road which detracted at times from the moving personal story. 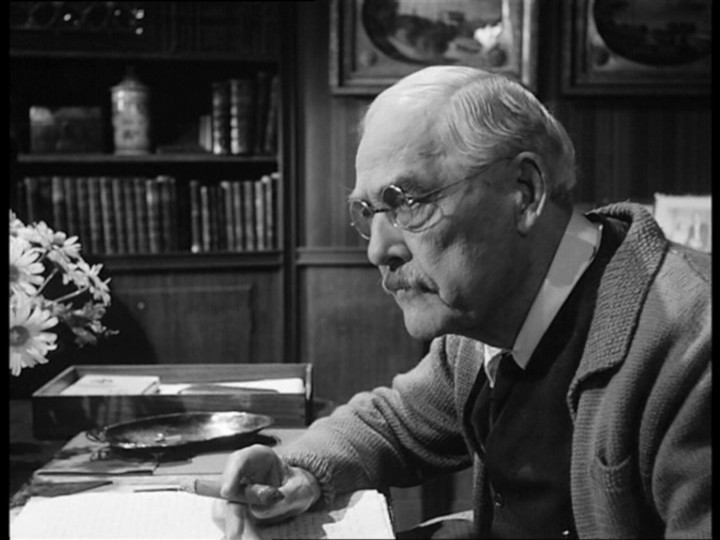